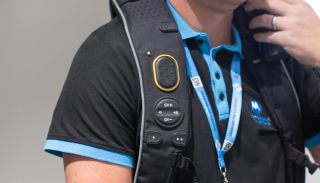 With many major cities facing a growing number of security threats, both physical and digital, the need for police forces to be smarter and more connected is greater than ever.

Many of the UK’s top forces have been working with Motorola Solutions, which provides a range of devices and services to officers on the beat as well as their command centres.

The company has today unveiled a new ‘Innovation Centre’ in London which it hopes will spur on future technological development to allow police officers to cope with an ever-growing number of threats without drowning in the information deluge created by modern IT systems.

Motorola is celebrating 50 years of working in the UK to support the nation’s emergency services, including police, fire and transport officers. The company, which acquired the Tetra emergency services network in 2016, now covers most of the major public safety organisations, as well as providing 100,000 radios and other handheld devices for UK officers.

However Motorola realises that technology can now play a major part in maintaining public safety, particularly in policing, an industry which has, in theory, not changed too dramatically since its inception in Victorian times.

“Public safety organisations need not only the technology and tools to meet their evolving needs, but also a partner with specialised knowledge and experience to understand their challenges, find solutions and imagine new ways to get the job done.”

The company is now supporting a vision it calls ‘Smart Public Safety for a Digital Society’, whereby technology can be used to make police better connected and able to carry out more proactive policing than ever before.

Motorola estimates that a typical officer only spends 60 per cent of their time on proactive policing, with 15 per cent being spent responding to incidents, and the remaining 25 per cent taken up by what it calls “post-incident” tasks - often repetitive paperwork.

Motorola’s technology hopes to shrink that 25 per cent, with the time saving instead going towards growing the time spent on the beat, and the company was able to show off a number of new trials and services it says can do just that.

This includes a new generation of connected body devices worn by the officers, as all police are now equipped with either audio or video capture capabilities. This device can upload data to a central command quicker than ever before, and also provide location and context-based information which can prove vital in investigating cases. The kit can even be equipped with facial recognition software to track suspicious individuals in a crowded environment, or be used to provide translation services to help deal with victims who cannot speak English.

But Motorola will also be providing support for the police forces through software innovation, particularly concerning predictive analytics and AI. Predicting crime before it happens has long been a science-fiction fantasy, but Motorola’s new services are able to go further than ever before to help officers out on patrol.

The company’s CommandCentral Analytics service can give an overview of city streets and corresponding crime trends to recommend where best for officers to patrol. Bringing together data from wider crime analysis, commanders can create a far more focused beat for their officers to maintain, allowing for significant time and financial savings.

Motorola’s Pronto software suite, launched in 2016 along with Airwave, is already in use by a third of the UK’s police forces, providing major improvements in officer efficiency, particularly in everyday tasks such as vehicle checks and speeding tickets.

All of this helps support the new ‘Connected Police Officer’, who is able to work more efficiently and smartly than ever before thanks to a number of new technology solutions. Motorola says that with the advancement of connected IoT technology, every part of of an officer’s kit can become a sensor, relaying real-time data to command centre but also working in tandem with everything else.

For example, when an officer draws their weapon, their body camera is automatically turned on, and also alerts dispatch that a potentially dangerous incident is unfolding, and alerts fellow officers in the area.

In a time when the world’s urban police and security forces are coming under more scrutiny than ever before, technology can play a vital role not just in reassuring citizens, but creating a smarter and safer world for all of us.