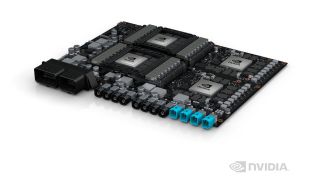 Smart self-driving cars could become a reality sooner than predicted after Nvidia revealed its most powerful AI hardware platform to date.

"In the future, the more computational power you have, the smoother your ride will be,” Huang told attendees. "Transportation is basically going to get reinvented."

"Creating the car computer is one of the extraordinary ventures that these companies have to take in order to create the car of the future."

“The amount of computation is absolutely nuts...we're basically packing a supercomputing data centre in your trunk," he added.

Looking to power “Level 5” standard robotic vehicles, particularly self-driving taxis, the Drive PX Pegasus offers major steps forward in terms of computing power, able to carry out over 320 trillion operations per second. Huang noted that as the industry develops, self-driving cars are generating and collecting more data than ever, meaning that they need more powerful hardware to process and analyse this.

Drive PX Pegasus features two of Nvidia’s Xavier SoCs, which have been developed specifically for deep learning, alongside two next-generation Nvidia GPUs, totalling a huge powerful system. Nvidia hopes that this small package, around the size of a US vehicle licence plate, will be able to replace the mountain of hardware currently being used in many autonomous vehicles, giving manufacturers much more intelligence and efficiency.

Alongside hardware power, Drive PX Pegasus also contains “fail-operational” systems for added safety and security in case of any incidents, which store backups of an operative situation that can be restored in case of system failure, either allowing the vehicle to continue running, or pull over safely.

Nvidia is currently working with a number of leading automotive manufacturers, with its hardware already being used by the likes of Tesla and Audi. ‘Level 5’ driving marks the biggest step forward for autonomous vehicles, however, with Nvidia aiming to get Drive PX Pegasus released in the middle of 2018, with universities and research programs also set to get early access to the technology.

The company says that it sees vehicles powered by the new technology will be particularly useful in locations such as airports, theme parks and university campuses, with users able to summon them using smartphones, and used on private roads rather than public highways.