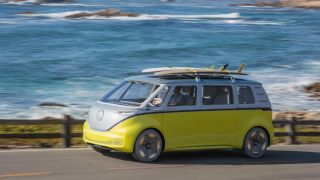 Nvidia has announced a major expansion to its self-driving vehicle work, taking the wraps off new partnerships with Uber and Volkswagen at CES 2018.

“The future of transportation will be transformed by mobility services. Convenient, affordable mobility-as-a-service will reshape cities and society, and help support the billion-person increase in the world’s population over the next decade,” said Nvidia CEO Jensen Huang. “Autonomous vehicles are the critical technology to making mobility services pervasive. We’re thrilled to be working with Uber to realise this vision.”

Nvidia revealed that it is looking to use its Drive IX platform to power a new generation of Volkswagen vehicles, including the new I.D Buzz (pictured above), a remaster of the iconic MicroBus set to be released in 2020 and empowered with AI technology including self-driving ability.

“Artificial intelligence is revolutionising the car,” said Volkswagen CEO Herbert Diess. “Autonomous driving, zero-emission mobility and digital networking are virtually impossible without advances in AI and deep learning. Combining the imagination of Volkswagen with NVIDIA, the leader in AI technology, enables us to take a big step into the future.”

Elsewhere, Uber revealed that vehicles powered by Nvidia hardware have already driven over two million miles autonomously during tests. Uber's self-driving fleet, which is made up of both cars and freight trucks, have completed over 50,000 journeys as the company looks to push closer to a public launch within the near future.