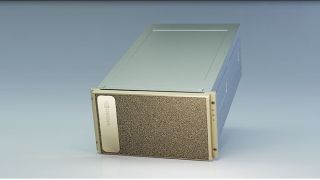 Nvidia has just released its next-generation artificial intelligence (AI) chip - and it's quite the beast.

During a keynote at Nvidia GTC, CEO Jensen Huang referred to the new Nvidia A100 as “the ultimate instrument for advancing AI”, VentureBeat reported.

The chip packs 54 billion transistors, allowing it to reach performance of up to five petaflops. For context, the company's previous model (the Volta) is 20 times less powerful.

According to Huang, this performance leap means the entire capability of a data centre can now fit into a single rack.

During a press briefing, Paresh Kharya, Director of Product Management Datacentre and Cloud Platforms argued the new chip's value “off the charts”.

According to Kharya, the level of performance achieved by businesses for an investment of $11 million will now cost only $1 million. Similarly, the output of 600 CPU systems, 25 server racks and 630 kilowatts of power can now be matched using just a single rack and 28 kilowatts of power.

“That’s why you hear Jensen say, ‘The more you buy, the more you save,'” said Kharya.

Among the first organisations to order the new chip is the US Department of Energy’s (DOE) Argonne National Laboratory, which will use the new technology as part of efforts to analyse the novel coronavirus.