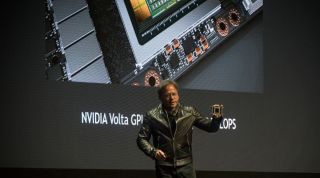 With the world around us becoming smarter and generating more data each day, there is an increasing need for greater computational power in terms of both CPU and GPU capabilities.

At the company’s GTC Europe event in Munich yesterday, Nvidia CEO Jensen Huang hailed the effect that advances in GPU computing are having not just across the technology industry, but the world as a whole.

"Just about every modern scientific instrument has a GPU in the back - because every form of measurement or detection we know, whether we're doing it at astronomic or atomic level, requires computational power,” Huang said in his keynote address.

Huang noted that the 2017 winners of the Nobel Prize for Chemistry and Physics both relied heavily on the company’s GPU hardware to make amazing breakthroughs, with the former celebrated for taking detailed pictures of molecules at an atomic level, and the latter triumphing for proving Einstein’s theory that gravity comes in waves.

"We're solving the unsolvable,” Huang noted, “enabling breakthroughs is the ultimate purpose for our company.”

Nvidia’s GPUs enjoy a near-monopoly across the world, with the company streaking ahead in terms of power and client base. But this does not mean that the firm is content to rest on its laurels.

Huang noted that there are two “fundamental forces” shaping the technology industry right now - the end of Moore’s Law, brought about by huge advances in hardware development, and what he called, “the big bang of deep learning”.

Nvidia has massively benefitting from these two forces coming together to, “turbocharge the adoption of GPU computing”, Huang noted, adding that, “no company of our scale and size has ever dedicated itself to one field of science.”

“Because we do computing in a fundamentally different way,” he continued, “and because we optimise each and every application with a specialised function...we've been able to accelerate applications far faster than Moore's Law.”

“People are solving the questions that for a long time, we thought were impossible to solve,” Huang concluded, noting that the explosion of IoT devices is only set to push GPU investment and development further forward in the coming months and years.

“Our strategy is, with all of our might, push forward the development of better, smarter, more complex AIs - faster.”