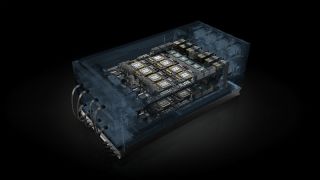 Nvidia has unleashed a major upgrade to its high-performance computing and artificial intelligence (AI) capacities with its most powerful hardware yet.

During its GTC Taiwan event, the company announced the HGX-2, which it calls “the first unified computing platform for both artificial intelligence and high performance computing.”

According to Nvidia, the HGX-2 provides flexibility to support the future of computing. It allows high-precision calculations using FP64 and FP32 for scientific computing and simulations, while also enabling FP16 and Int8 for AI training and inference.

“The world of computing has changed,” said Jensen Huang, founder and chief executive officer of NVIDIA, speaking at the GPU Technology Conference Taiwan, which kicked off today. “CPU scaling has slowed at a time when computing demand is skyrocketing. NVIDIA’s HGX-2 with Tensor Core GPUs gives the industry a powerful, versatile computing platform that fuses HPC and AI to solve the world’s grand challenges.”

This architecture will help run applications for scientific purposes, like weather forecasting. Also, it will be capable of training and running AI and deep learning instances, which can be used for things like image or speech recognition.