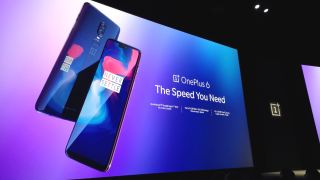 OnePlus has revealed its latest flagship device as it looks to keep pace in the Android smartphone market.

The new OnePlus 6 is the company's most powerful device to date, featuring its largest screen ever at 6.28in, along with all-day battery life and some powerful hardware inside.

Speaking at the launch event in London, company co-founder Carl Pei called the new device, "the fastest flagship experience OnePlus has created," noting that it was focused on looking to overcome the issue of slowdown that affect many top devices around today.

Inside the OnePlus 6 is a Qualcomm Snapdragon 845 processor clocked up to 2.8Ghz, backed up by your choice of 6GB or 8GB of RAM and up to 256GB storage.

This is all powered by a 3300mAh battery which features Quick Charge technology, giving you a days power in just half an hour of charging.

OnePlus has once again included its OxygenOS software, based on Android Oreo 8.1, but Pei added that the new device will support the developer preview version of Google's latest Android P build.

Elsewhere, the OnePlus 6 features MIMO 4x4 and support for Cat.16 wireless networks, meaning it can support download speeds of up to 1GBps.