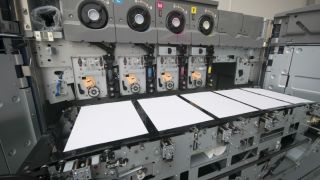 Businesses that are relying heavily on print are putting themselves at plenty of unnecessary security risk, a new report by Quocirca suggests.

The firm's Global Print Security report says almost two thirds (60 per cent) of organisations worldwide have experienced at least one print-related data loss in the last 12 months. Looking at all cybersecurity events that happened in the past 12 months, 11 per cent of them were print-related.

The yearly average cost of such breaches amounts to £313,000, it says, adding that most of them come from ‘accidental user action’ or, as it is more commonly known, an insider threat.

Businesses try to mitigate these risks, but their efforts ‘lack maturity’. Roughly a fifth (27 per cent) of organisations can be considered “print security leader”, by Quocirca’s Print Security Maturity Index. More than three quarters (77 per cent) said they are increasing how much they’re spending on print security.

Businesses are well aware of both the importance of print, and the risk it brings, however. Almost all businesses see print as an important tool today and in the future. Risks stemming from the use of print are among the top five biggest risks, and that is something three quarters of organisations fear.