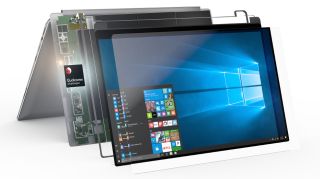 Qualcomm has revealed more details on its expansion into connected PC devices with Windows 10 on ARM power.

The chipmaker has teamed up with Microsoft for a range of what it calls Always Connected PCs, which take the form of typical laptops but are powered by a Snapdragon processor instead of hardware from Intel or AMD, and will go on sale soon.

The partnership has signed up some of the world's biggest PC manufacturers to back the launch, with HP, Asus and Lenovo all planning to release devices within the next few weeks.

Three devices (one from each manufacturer) will initially be available, with the Lenovo Miix 630, Asus NovaGo and HP Envy X2 taking the lead in this new era. Lenovo announced its detachable 2-in-1 device back at CES last month, featuring Snapdragon 835 mobile PC platform and Windows 10S, with Asus and HP revealing their devices back in December.

Some of the UK's top high-street retailers have also been brought on board to stock the new devices, including PC World and John Lewis, along with standalone stores from Asus, BT and Microsoft.

Qualcomm has also revealed which carriers will be offering data plans for the new devices, with EE getting an exclusive in the UK, and Sprint, Verizon, AT&T and T-Mobile all offering the device in the US.

“Microsoft and Qualcomm Technologies have worked closely with leading PC manufacturers to push the boundaries of what a Windows PC can do and how it performs, while still offering the features and innovative experiences that Windows 10 users expect,” said Matt Barlow, corporate vice president of Windows and Devices, Microsoft.