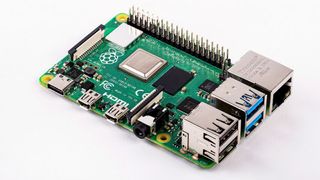 The Raspberry Pi, one of the world's smallest and most popular computers, has just gotten its fourth iteration. The new Raspberry Pi 4 machine brings upgrades on pretty much all fronts, except the price.

The Raspberry Foundation claims the new chip will make the device roughly three times faster than its predecessor. It's equipped with Bluetooth 5.0, two USB 3.0 and two USB 2.0 ports, dual monitor support, at resolutions up to 4K, as well as 4Kp60 hardware decode of HEVC video.

Hardware upgrades aside, the new Raspberry is also improved on the software side. The Foundation claims to have “radically overhauled” the operating system, based on the forthcoming Debian 10 Buster release. Users can expect ‘numerous’ behind-the-scenes improvements, including Chromium 74.

Users are advised to download a new image, instead of upgrading the existing card. “This ensures that you’re starting with a clean, working Buster system. If you really, really want to try upgrading, make a backup first,” it was said.

The device also comes with a couple of fancy accessories, including the new case, all new power supply, and micro HDMI Cables.

You can find more details about the new Raspberry Pi device here.