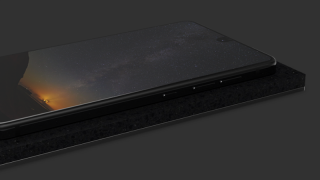 There's an all-new competitor on the Android phone scene - and it's offering suffering truly different.

Unveiled by the creator of Android, Andy Rubin, the Essential Phone brings a number of unique features along with an intriguing design that looks set to divide fans and commentators alike.

The Essential Phone has some impressive hardware, running an octa-core  Qualcomm Snapdragon 835 processor, 4GB of RAM, 128 GB of storage, and a 3040 mAh, non-removable battery.

The device is built from titanium and ceramic material, with a huge 5.7-inch, 2560x1312, 505ppi display built from Corning Gorilla Glass 5. However the top of the screen comes with what can only be described as a hole where the front-facing camera is located.

The screen has no bezels on three of its sides, with the Rubin telling the media that he didn’t want to do what Xiaomi and Sharp did and place the selfie camera on the bottom side. He called that approach ‘the nostril camera’.

"I call that nostril cam because when I'm taking a selfie, it's like literally a picture of my nose, so people kind of have to turn it [the phone] around,” he said during the Recode’s Code conference. I think that's a terrible user experience," he said.

The Essential Phone also comes with an all-new AI assistant. although details are scarce for the moment, and will feature the ability to add on extra modular accessories thanks to magnetic connectors on the rear.

At the moment, those who preorder the phone can get a 360-degree camera add-on, but Rubin hopes third-party manufacturers will build more, different add-ons.