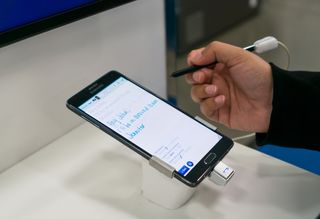 Samsung's decision to inform owners of the new Galaxy Note 7 to permanently switch off their devices has caused shares in the firm to plummet by 7 per cent, closing at $1,318 on the Korean Stock Market on Monday.

The company urged users of its latest phablet to immediately turn off their devices in the hope of preventing further accidents and injuries from occurring. On September 2nd, Samsung announced that it would be recalling every Galaxy Note 7 due to a battery related issue that it suspects affects 24 out of every million phones it has manufactured so far.

The company has estimated that it will likely take around two weeks for replacements to arrive in consumer's hands. In the meantime, Samsung is loaning its customers mobile phones and working to produce batteries that do not contain the flaw that began this controversy.

The head of Samsung's mobile business, Koh Dong-Jin tried to reassure customers that the situation would be rectified shortly, saying: “We are asking users to power down their Galaxy Note 7s and exchange them as soon as possible. We encourage... Note 7 customers to contact their place of purchase or call the designated call centre locally as soon as possible.”

Several air carriers and aviation authorities have even banned the device from being used or carried in the US, Australia, Canada, Japan, Singapore, Indonesia and India. This is in addition to stories such as a car that blew up while the phone was charging and a hotel room that was destroyed by a charging Note 7 in Australia that have brought the phone's faults to the attention of regulators and consumers alike.

If you or anyone you know own a Note 7, it is essential that you turn the device off and refrain from using it until a replacements handset is made available.