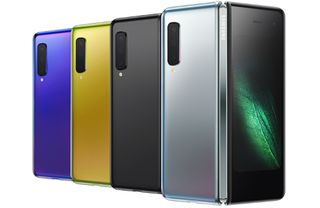 Samsung has launched a major salvo in the smartphone war but unveiling several new mobile devices - including its first-ever folding smartphone.

In its 10th anniversary of the original Galaxy smartphone, the company revealed a range of new devices at its Galaxy Unpacked event in New York, with the new Samsung Galaxy Fold stealing the show away from the hevaily-rumoured Galaxy S10 and S10+.

However Samsung also revealed the budget-friendly Galaxy S10e, which packs all the features you need into a more compact build, and a specially-equipped S10+ designed with 5G networks in mind

The Galaxy Fold was the undoubted star of the show, sporting a 7.3in Infinity Flex Display that can be folded in half on a hinged connection. This, coupled with Samsung's App Continuity feature, means apps can be expanded from the small screen when the device is fully unfolded, as well as allowing multi-app functionality.

The device sports two batteries (one on each half) and is powered by an octa-core processor, 12GB RAM and 512GB storage, all backed up with a 4,380mAh battery that Samsung says will provide "all-day" life.

The Galaxy S10 and S10+ come with an upgraded dynamic AMOLED display (6.1in and 6.4in respectively) that the company says marks a "new generation of display technology". Stretching across the entirety of the front of the device, the display also features Samsung's new 'hole-punch'

There's also an all-new 'ultrasonic' fingerprint scanner under the screen, which Samsung says again is a world's first, and should provide an added layer of security, alongside a built-in AI security systems that can detect fake fingerprints, and a new system that can detect insecure Wi-Fi networks in real-time.

Running Android 9.0 Pie, the Samsung S10+ will offer up a choice of 8GB or 12GB RAM, all powered by an octa-core Exynos 8nm processor. There's also up to 1TB storage that thanks to microSD can be expanded even more, which Samsung says is "like having a supercomputer in your pocket".

This is all powered by Samsung's biggest batteries yet, with the 4,100mAh unit in the S10+ lasting more than 25 percent longer than the S9+ thanks to a new learning AI that learns how you use your phone to help consumer less power.

The device also offers wireless charging for your watch, ear buds or smartphone, and the S10+ itself can be powered up wirelessly as well.