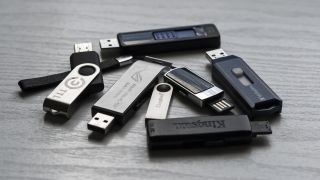 Schneider Electric has warned its customers that USB drives included with some of its products could potentially be infected with malware.

USB flash drives included with the firm's Conext Combox and Conext Battery Monitor from its solar power range were “contaminated” during the manufacturing process according to a security advisory released by the company, saying:

“Schneider Electric is aware that USB removable media shipped with the Conext Combox and Conext Battery Monitor products may have been exposed to malware during manufacturing at a third-party supplier’s facility.”

All versions of the company's Conext Combo and Conext Battery Monitor ship with USB drives that contain user manuals and non-essential software and it seems that they all may have been affected.

Schneider Electric is requesting that customers do not use the affected USB drives and recommends that they should be disposed of to prevent infecting users' systems with malware. The company also revealed that the malware should be detected and blocked by all major anti-malware programs which suggests that this was not a targeted attack.

This news should serve as a reminder that inserting any unknown USB flash drive into your system can have serious implications and should be avoided at all costs.