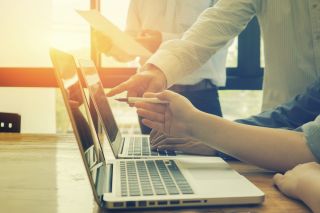 In order to appeal to larger organisations looking to utilise its cloud-based team communication tool, Slack has announced a new product specifically tailored to companies with tens of thousands of employees called Slack Enterprise Grid.

The company's new offering is essentially a redesign of its popular collaboration tool that includes new features and other changes that make it easier for a number of small teams from different departments to work together.

Large companies that opt to upgrade to Slack Enterprise Grid will also be able to create an unlimited number of 'workspaces' which will finally allow each individual team to have its own workspace as opposed to an entire company sharing the same one.  For instance, each department of a large organisation can have its own workspace yet employees from different workspaces will still be able to collaborate and message one another using the service.

Slack 's co-founder Stewart Butterfield noted that its service has been successfully implemented at larger organisations, saying: “Slack has worked with some of the largest companies in the world.  We have many customers that have 2,000, 5,000, 10,000 people at their companies.  But it's been a slow organic bottom-up evolution.”  However, the company's new enterprise offering will hopefully allow Slack to expand into even more industries.

In an effort to appeal to health care companies and large medical organisations, Slack recently acquired FINRA and HIPAA certifications and it is currently in the process of adding additional security features with the aim of courting companies operating in finance, government and telecommunications.

A number of large companies including IBM, PayPal and Capital One are now currently using Slack Enterprise Grid.