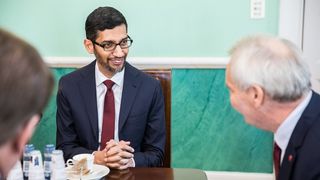 This makes the CEO of Google’s parent company one of the world’s highest-paid executives, according to Bloomberg.

Most of the compensation came in the form of stock awards, which means the definitive total depends on the company’s stock return relative to other S&P 100 businesses.

Last year, Pichai earned a yearly salary of $650,000, according to the proxy statement filed with regulators late last week - 1,085 times the median total pay of his company's employees. It also appears Pichai’s salary may jump to $2 million in 2020.

Sundar Pichai became Alphabet’s CEO in late 2019, taking over from Larry Page when he stepped down, together with co-founder Sergey Brin.

The regulatory filing comes during a period in which Google is facing a number of significant challenges, including data privacy and protection troubles, as well as the coronavirus outbreak and impending recession.

The latter has forced the company to slow down hiring for the rest of 2020. Earlier this month, Pichai said the company would also be “recalibrating the focus and pace of our investments in areas like data centres and machines, and non-business essential marketing and travel.”