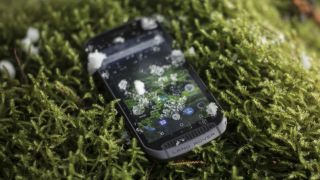 Land Rover is joining the ruggedized smartphone ranks with the ‘Explore’, a handset inspired by the iconic Land Rover Discovery car.

Built in partnership with the Bullitt Group, the Explore promises to go “places other phones can’t” and is built to withstand extreme temperatures, weather conditions and situations.

The five-inch device is protected by IP68 dust, splash and water resistance and can withstand a drop of 1.8 metres and can be plunged underwater – even in salt water.

There are a host of survival tools, including advanced mapping applications, compass and SOS light and the display can be used with gloved and wet hands. A custom dashboard can display sensor data and other information such as weather.

The meaty 4,000mAh battery promises a lifespan of two days of constant use and this can be supplemented by a separate ‘Adventure Pack’ which also improves the accuracy of the GPS and mapping.

The device is powered by a 2.6GHz processor, 4GB of RAM and Android Nougat, although a scheduled update for Oreo is on the way. There’s 64GB of storage which can be expanded via the MicroSD card slot and a 16 megapixel rear camera.

“This is the smartphone we’d all like to own – a perfect combination of design and functionality that embodies the Land Rover DNA and enables customers to be outdoors for longer, with the confidence to go further,” said Joe Sinclair, Director of Branded Goods and Licensing at Jaguar Land Rover.

The device will be shown off at Mobile World Congress (MWC) next week and will be released on 26 April, costing £599