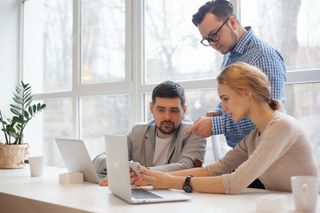 According to a major study by the CEB, the proportion of women who choose to purse careers in the IT profession will likely rise over the next four years as more and more businesses adopt digital technology.

The CEB is a membership group for business executives that has predicted that the number of women working in IT will significantly increase between now and 2020 as a direct result of a wider range of businesses recruiting more people who possess IT skills.

New opportunities for women interested in IT will present themselves in the future when IT departments will have a greater need to employ people with a wider range of skills. Practice leader at CEB, Kris Van Riper offered further insight into how the industry will shift, saying: “There will be more people in the IT team with marketing background, maybe digital marketers; more people with customer experience background; more people who are business analysts, who are getting requirements from customers; and project managers.”

This trend parallels a shift in the role of the IT department that was once responsible for driving IT projects for business but is now seen more as an advisor other parts of the business that are increasingly pursuing the adoption of digital technology.

Research has also shown that companies that have reached a more equal balance between their male and female employees are more successful than those that are more male dominated. In 2010, McKinsey conducted a study that found that companies with more women on executive committees had a 47 per cent higher return on equity.

Van Riper expounded on how more women working in IT will benefit the industry as a whole, saying: “IT will need to engage with a broader set of people across the enterprise. A diverse workforce will help them better understand the opportunities and the risks.”

Hopefully the projections made in CEB's study turn out to be true so that the IT industry can become more robust and able to meed the additional demands put on it.