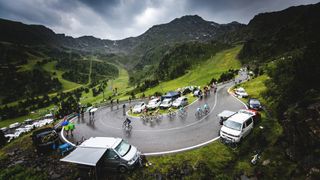 The 2017 Tour de France could be one of the most intense yet, with the world’s best riders all vying for the coveted yellow jersey.

With this year’s event set to roll out from Dusseldorf on Saturday, millions of cycling fans around the world will be eagerly tuning in to see if Chris Froome can triumph in the world’s greatest race for a third time.

This year, however, viewers and commentators alike will be able to enjoy more in-depth analysis and insight than previously available thanks to the race’s technology partner Dimension Data.

The firm has today announced that the 2017 Tour will see the introduction of new machine learning technology that will make the action more immersive than ever before.

Dimension Data has worked together with the ASO, the organisers of the race, to develop an advanced data analytics platform incorporating machine learning and complex algorithms that combine live and historical race data to provide even deeper levels of insight as the race unfolds.

The platform is expected to create and analyse over three billion data points during the 21 stages of the Tour, a significant increase from last year’s 128 million data points. This is generated from GPS transponders installed under the saddles of each of the 198 riders in this year’s race.

The information from these transponders is then combined with external data about the course gradient and prevailing weather conditions to generate insights such as live speed and the location of individual riders, distance between riders, and composition of groups within the race.

This year’s race will also embrace predictive analytics for the first time, with a new service looking to predict the likelihood of certain scenarios during the race, such as whether the day’s breakaway will be caught by the peloton.

The ASO is hoping that, when brought together, all this information will make the 2017 Tour de France easier to follow and more thrilling for the viewers at home across the world.

“What’s especially exciting for us is how we’re helping A.S.O. to attract a new generation of digitally savvy fans, and how advanced technologies like machine learning are opening up new possibilities for providing the insights that today’s fans demand.”

Dimension Data will also be helping secure the race during its three-week span from any cybersecurity attacks. The company is providing a cloud-based security system to guard IT systems throughout the Tour architecture, having blocked just over 1.4 million suspicious access attempts during last year’s event.

“Today, our followers want to be immersed in the event,” said Christian Prudhomme, Tour de France race director. “They’re more digitally engaged on social media than ever before, and want a live and compelling second-screen experience during the Tour. Technology enables us to completely transform their experience of the race.”