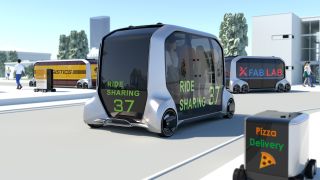 In an effort to accelerate the development of self-driving car services, Toyota and SoftBank have announced a new joint venture that will combine the automaker's manufacturing expertise with technology from Japan's most influential tech firm.

The two companies will work together to jointly develop a platform to operate self-driving vehicles which will be used as mobile shops, hospitals and other services to bring their vision of a future with fewer personally owned vehicles to life.

The joint venture called Monet will start small with an initial investment of $17.5m with SoftBank owning just over half the business. Monet will focus on Japan at first before eventually going global.

Chief Technology Officer at SoftBank and the new CEO of Monet, Junichi Miyakawa explained the reasoning behind the new partnership, saying:

“SoftBank alone and automakers alone can’t do everything. We want to work to help people with limited access to transportation.”

Under the partnership, Toyota and Softbank will work together to develop the automaker's multi-purpose mobility service based on its “e-Palette” concept unveiled at CES earlier this year. Toyota will produce the hardware and software for convoys bus-sized, self-driving multi-purpose vehicles which can be used as pay-per-use hotels or mobile restaurants.

The companies plan to roll out an autonomous driving service using e-Palette by the second half of the 2020s.

Softbank's technology will be used to collect and analyse transportation data to ensure cars are dispatched efficiently and are available when and where they're needed.

Automakers and tech giants have realised that creating self-driving cars is not the kind of project they can go into alone and we will likely see similar partnerships going forward as the race for autonomous vehicles intensifies.