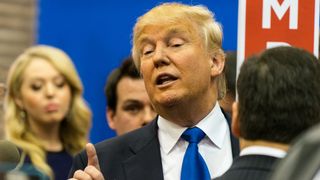 When the US and China eventually come to a trade deal, Huawei could still be a part of it, despite all the recent trauma the Chinese telecommunications company has suffered with the States.

This was hinted by US president Donald Trump this Thursday, when he spoke to the press at the White House, BBC reported.

"If we made a deal, I could imagine Huawei being possibly included in some form or some part of it," he said. He also said "You look at what they've done [Huawei] from a security standpoint, a military standpoint. Very dangerous."

President Trump recently signed an order which placed Huawei on the US trade black list, banning US companies from doing business with Huawei. Large companies complied and it made headlines – Google, Broadcom, Qualcomm – have all announced they will be cutting ties with the Chinese giant.

Even non-American companies like ARM which get their supplies from the States, are turning their backs on Huawei.

The Chinese, on the other hand, describe Trump's behaviour as “bullying”, saying the best answer would be to have Huawei grow even stronger.

That could be quite the challenge, especially when losing Google’s support also means losing Android. Huawei allegedly already has an alternative mobile operating system lined up, one which would support Android apps.

The company was branded a threat to national security, because of the possibility of its 5G infrastructure being used by the Chinese government for espionage.