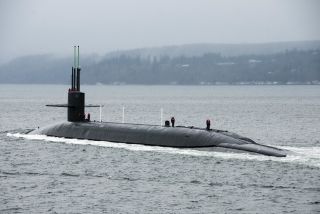 A new report from a group of anti-nuclear campaigners has revealed that the UK's nuclear deterrent submarines could potentially be vulnerable to hackers when surfaced or ashore.

The British American Security Information Council (BASIC) highlighted a numerous ways that Britain's submarines could be targeted by attackers in its report titled “Hacking UK Trident: A Growing Threat” using new techniques that emerged over the past few years.

The report was written by Russian security researcher Stanislav Abalmov and BASIC's own executive director, Paul Ingram, who lay out how the vessels are vulnerable to hackers because of the vast amount of computers and networked hardware on-board, saying:

“Trident's sensitive cyber systems are not connected to the internet or any other civilian network.  Nevertheless, the vessel, missiles, warheads and all of the various support systems rely on networked computers, devices and software, and each of these have to be designed and programmed.  All of them incorporate unique data and must be regularly upgraded, reconfigured and patched.”

Despite the fact that these systems could potentially be vulnerable to an attack, these submarines are often underwater for months at a time which creates an air-gap between them and the outside world, protecting them from any attempts that could be made by hackers.

BASIC also points out that while ashore, the submarines could be accessed by subcontractors or other dockyard maintenance personnel.  The chance of this happening though is highly unlikely given the tight security and other safety measures that prevent unauthorised access to their computer systems.

The report does raise some interesting issues regarding the safety of the UK's submarines but overall BASIC's arguments are more hypothetical than practical and a cyber attack is highly unlikely.