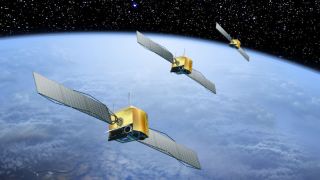 The UK is considering building its own network of positioning satellites, the media are reporting this Monday morning. An official announcement could come out some time during the week, it was said, with Prime Minister Theresa May setting aside up to £100 million to "mapping out" how it would work.

Obviously, any dates on when the network might be operational are unknown, and we will probably know more details when (and if) the official announcement is made.

The entire project will probably cost a bit more than pocket change (roughly £3 billion), but it seems as the UK doesn’t really have a choice.

"We still want to be part of the Galileo project but we have got to prepare for all eventualities," a government source told The Telegraph, adding that the funding would help "map out how a sovereign satellite system would work."

Once Brexit is finalised (if it’s finalised, that is), the UK will no longer be involved in the EU’s Galileo positioning satellites. The EU said that it cannot legally accept that parts of Galileo made by a non-EU contractor are ‘secure’. The UK has already invested more than a billion euros in Galileo, and has threatened to sue.

“There is obviously the question around Galileo. We would like to continue to participate and we’re disappointed by the approach that the European Commission has taken,” Graham Turnock, Chief Executive of the UK Space Agency, told the Telegraph. “We would still like a good outcome on Galileo but the signs, I’m afraid, are not terribly positive.”