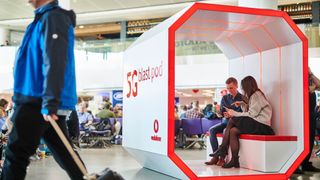 If you’re interested in experiencing just how fast 5G is, you might want to head over to the Manchester Airport. Vodafone has switched 5G at the location, allowing travellers to test the new technology out.

As there are still no 5G devices people can use, Vodafone used its Gigacube 5G-enabled router to connect to the network, and gives users free access to Now TV to test the speeds.

According to Vodafone, it takes less than a minute to download a TV episode, and roughly six minutes to download the whole series, compared to 4G which takes roughly 26 minutes.

Vodafone also says that the trials are set to continue on the Snow Hill railway station in Birmingham.

“We all love to catch up on our favourite TV shows, play games or finish off some work when travelling. 5G, with its fast speeds and quick response times, will make that quick and easy, even in busy locations,” commented Nick Jeffery, CEO, Vodafone UK.

“We are proud to be the first provider to bring 5G to an airport and will be adding more major travel hotspots to our 5G network throughout the year,” he added.

Vodafone says 5G will offer a Wi-Fi like experience on the go.