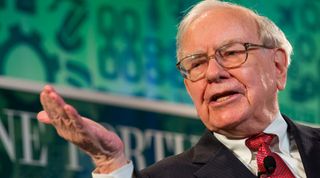 Bitcoin and other cryptocurrencies are not destined to be a success, according to one of the world's foremost investors.

Warren Buffett, the head of iconic investment firm Berkshire Hathaway, has said that he would never invest in any cryptocurrency due to their volatility.

In an interview with CNBC, Buffett, who is estimated to be worth around $84 billion, said, “I can say almost with certainty that cryptocurrencies will come to a bad end."

"When it happens or how or anything else, I don't know," he added. "If I could buy a five-year put on every one of the cryptocurrencies, I'd be glad to do it but I would never short a dime's worth."

Buffett is well-known for his incredibly successful  career, which has seen him build immense wealth by investing in firms such as American Express, Coca-Cola and Wells Fargo, but has previously stated his wariness around getting involved in technology firms.

"I get into enough trouble with things I think I know something about," Buffet noted. "Why in the world should I take a long or short position in something I don't know anything about.