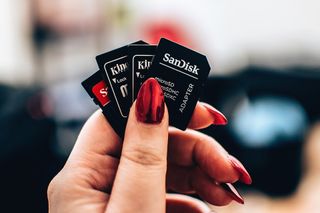 Theoretically, you can now have a smartphone with 2TB of storage. I say theoretically, because that includes a 1TB smartphone, and Western Digital’s new 1TB microSD card.

Unveiled at the Mobile World Congress that’s currently taking place in Barcelona, Western Digital promises not just more storage, but also more speed when it comes to reading and writing stuff on the card.

It’s called the SanDisk Extreme UHS-I microSDXC. It can develop speeds of up to 160MB/s for reading files off the card, and 90MB/s for writing on it, but that requires a device that can develop these speeds, as well.

There’s also a smaller version, the 512GB SanDisk Extreme UHS-I microSD card, and that one will cost $199.99.

The company believes consumers have grown to demand high-quality content and understand that this quality demands plenty of storage.

“People trust SanDisk-brand cards to capture and preserve their world. Our goal is to deliver the best possible experience so consumers can share the content that’s important to them,” said Brian Pridgeon, director of marketing for SanDisk-branded products, Western Digital.

Both the 1TB and the 512 GB SanDisk Extreme UHS-I microSD cards are available for pre-order now at SanDisk.com. Full retail release is expected in April this year.