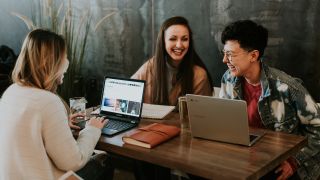 The sheer amount of online content can make it difficult to stand out from the crowd. Nowhere is this more true than with YouTube, where 300 hours of video are uploaded every minute.

However, utilizing the right tools can ease the creative process, especially when it comes to editing. While crafting video was once the preserve of Hollywood insiders and film students using specialist equipment, there are now a plethora of editing options available to all.

But it’s not always immediately obvious which editor is right for you and your project. In this article, we’ll explore which video editing tools are favored by YouTubers as well as their respective features, strengths, and weaknesses.

iMovie comes free with all Apple devices, so it has long been the first port-of-call for those new to video editing, and many well-known YouTubers still use the program. Its reputation for being basic is arguably unfair. It has a strong array of editing capabilities, built-in transitions, and titles. Properly utilized, these can produce impressive results.

Apple has also ensured the program is easy to use, and most of the interface is intuitive after a couple of hours. For example, on the newest update, there are only two options when iMovie is launched: create new, or select a previous project. In the editing suite itself there is a satisfyingly small array of buttons, but new ones will appear as and when they are needed — click the palette icon and a large array of color sliders pop up.

iMovie might not be the best choice for those with more complex needs — you will struggle to implement special effects, for example. But for many YouTubers it still provides enough versatility to produce a short video of good quality.

It also has a lot in common with Final Cut Pro X — a paid-for, professional editor — to make for an easy transition.

Final Cut is one of the most popular editing tools available in 2020. Packed with features, it has been used on blockbuster films and is able to handle the most complex of editing briefs. The $299.99 price tag includes an abundance of samples, effects, and titles that can achieve almost any desired outcome, but the software allows you to import your own if needed.

It shares its basic three-panel layout with iMovie: clip selector, editor, and timeline. The latter is also handily “magnetic,” allowing clips to seamlessly fit around each other, so it’s easy to see why it’s popular with so many YouTubers.

Like all higher-end video editors, sufficient processing power and disk space are required for it to work at its maximum, especially if you are editing in 4K. Indeed, it’s always worth researching thoroughly what specifications a program needs before you purchase it.

Adobe Premiere Pro has been the standard for Hollywood filmmakers for years and is trusted by many of the world’s most famous YouTubers. Premiere Pro has a vast number of capabilities that, after some practice, can help editors produce stunning video content. It is fully integrated in the Adobe ecosystem and projects can be shared to Adobe After Effects for the addition of complex visual elements. Don’t be scared by Premiere Pro’s complexity. When opened, a useful tutorial appears to get new users up to speed.

For those looking for something more basic, Adobe has a roster of accessible editing software to choose from. Premiere Elements, for example, is a reduced version of Premiere Pro which offers fewer features but a shallower learning curve at an affordable $100 price tag. The similarly stripped-back Premiere Rush is another inexpensive program that is specifically designed for social media videos. Pitched as Adobe’s offering for younger, online creators, it handily allows for mobile editing and on-the-go cloud sharing.

There’s little doubt that Final Cut Pro and Adobe Premiere Pro (and to some extent, iMovie) are the preeminent video editing software choices for YouTubers. Some of the most famous videos on the net have been created with them. However, a number of other programs deserve consideration.

Lightworks, for example, is available on Windows, Mac, and Linux for free, and supports non-linear editing (helping to preserve your source footage) and multitrack video. Whilst some may find the interface difficult to use, it is arguably the most powerful free editing software available in 2020.

Another great option is DaVinci Resolve, which offers a huge number of features on its basic version. Indeed, its color grading and audio production functions are famously versatile, and it works across Mac, Windows and Linux. Unlike Lightworks, it allows you to export your videos in a wide range of file formats without upgrading. DaVinci Resolve isn’t perfect— you aren’t able to export to social media directly, for example—but the editor still has an amazing offering for those looking for something cheap and effective.

Finally, there’s Blender. The open-source graphics renderer has long been revered for its versatility. It is also, perhaps surprisingly, an effective video editor. It has a selection of simple features and a limited 32-track timeline for media, making it a good tool for those aiming to create basic videos for free. However, with the content on YouTube ever increasing in quality, videomakers using programs like Blender will probably be in the minority.

To round things off, there are many fantastic software editing options out there, and YouTubers use a wide variety of solutions to make videos. Approved by filmmakers, Adobe Premiere Pro and Apple’s Final Cut Pro stand out from the crowd, but strong results can certainly be achieved without a huge outlay.

For some productions, free options like Lightworks or DaVinci Resolve could be the best choice. With every customer in the market — from fledgeling vloggers to established filmmakers — being so well served, the incredible volume of content uploaded to YouTube each day is easy to understand.