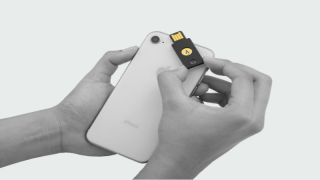 Mac and iPhone users will soon be able to add an extra layer of security to their devices, catching up to Windows or Android users. Courtesy of Yubico, Apple users are getting two-factor authentication in physical form, through a hardware authenticator.

Called YubiKey for Lightning, this small device connects to Apple devices either through USB-C or the Lightning connector, allowing for 'seamless authentication' for desktop and mobile devices.

It is currently in private preview to selected participants in the YubiKey for Lightning Program. General availability and pricing are yet to be announced, but those that wish to participate in the early bird program can do so by applying here.

Announcing the new device, Yubico's Ronnie Manning wrote that Apple has historically been a challenge, when designing physical token authentication.

NFC was impossible due to restrictions, so authenticators usually opted in for Bluetooth which wasn't an ideal solution.

“The industry has ended up with Bluetooth as the best way to connect with iPhones,” said Yubico SVP of product Jerrod Chong. “We felt that wasn’t good enough. If you want users to get over the hurdle of using a security device, you have to solve that usability problem.”

“It’s really a call to action to services and application developers to come work with us,” Chong says. “The key doesn’t solve anything if the application doesn’t support the device.”