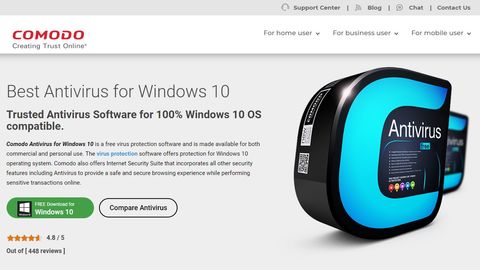 Including plenty of powerful protection tools, however it takes some time, knowledge and experience to get it all working.

Comodo Antivirus for Windows 10 is an especially robust antivirus tool that uses multiple security layers for keeping your PC safe from any harm.

The package provides real-time protection for the detection and blocking of known malware prior to it doing any harm.

Upon encountering an unknown or untrusted application, Comodo will sandbox it, which prevents it from infecting your PC.

You're also able to even run browsers or other legitimate software in this sandbox. Heck, you can even run a virtual desktop, which again makes it really difficult for any potential threats to make changes to your PC, or gain access to your online activities.

Power users can turn on and adjust a Host Intrusion Protection System, which provides a great deal of granular control over what software is able to do on a PC.

The lack of web filtering is notably lacking, and this means this software has no ability to block malicious URLs. At least Comodo's auto-sandboxing will ensure that all varieties of threats are neutralised, and there's a plethora of bonus features that rounds out the security package.

Missing in this release, which is officially known as Comodo Antivirus 11, is it lacks any significant new features. At least the Release Notes page makes this clear upfront. However, the company does indicate that it will make 'major changes' for upcoming version 12.

Still, we can see how capable Comodo Antivirus for Windows 10 is, with an upgrade to the baseline commercial product, Comodo Advanced Antivirus 11, bringing just a few features: shopping and banking protection, and unlimited support. At least it is inexpensive, costing an affordable $19.99 (£16) for the one device, one-year license.

Comodo's antivirus is easy to locate on their website as a free download, and we launched their installer in just a few seconds.

We were initially appalled in fact, with Comodo instantly providing the offer to ‘fix’ our browser experience with setting our browser home and new tab pages to Yahoo!, and also making it our default search engine. Annoyingly, this browser hijacks is set by default, so rushing through the installation process, and clicking Next without reading it carefully, you can become a victim. It's simple enough to avoid by just clearing the checkbox. However, our preference would be that Comodo skipped attempting to modify the browser settings in the first place, particularly as this really has nothing to do with making our PC more secure.

At least the installer does include some more relevant options, such as the option to install Comodo's secure Dragon Browser, and configuring your system to utilise Comodo Secure DNS.

When installing the Comodo Dragon browser, be aware that it can also grab all your Chrome settings, such as bookmarks, cookies, and history, and import it so it's immediately available for browsing. It’s a nice feature, although we'd also like to see some love for some other browsers, as for comparison, Avast imports both Firefox and Chrome settings into its Secure Browser.

The setup process is longer than the usual, compounded by a post-installation scan that was also far from speedy, including a tedious virus database update that was a lengthy two minutes all on its own, but finalmente, and Comodo Antivirus for Windows 10 was over the speed bumps, and ready to use.

Comodo Free Antivirus is noticeable right away for an interface that is both versatile and flexible. Viewing your security status and launching scans is easily done from a tiny desktop widget, or the more conventional antivirus console, and a switch to an Advanced View provides rapid access to the expert-level functions and features that comod provides.

There’s really no need to get down into the weeds for those wanting a simpler approach. More basic users can certainly use the program just like other antivirus programs, with a choice of scans that includes a Quick or Full Scan and sit back for the results, but experts may want to spice it up be exploring Comodo's other options.

A Rating Scan, by way of example, can scan the running processes, focused on the commonly infected areas, and then indicate the reputation of any and all the files it locates. This is an intriguing option to display the files that clearly aren’t malicious, but get designated as untrusted (both executables and certificates), along with any new files that Comodo has not encountered previously. If you’re suspicious that your system got infected with some nasty malware, but are struggling to prove it, this Rating Scan may set you in the right direction.

Key settings can be totally customised for individual scans, such as the sensitivity for heuristics checks, if the scanner will check on the internet for file ratings, and a totally configurable scheduler. Comodo doesn't restrict you to just running the scan daily or weekly at 2:30pm, for instance; options include having the scan launch on weekdays only, but only when the system is idle and plugged in.

In the event of a catastrophic failure, use the option for the creation of a bootable CD or USB flash drive which will disinfect even the most heavily infected of PCs.

The Comodo's sandbox is a valuable feature. Just fire it up, and you can run suspect programs in a secure area that won’t make permanent alterations to your PC. Another useful strategy is to use your browser from within your sandbox for protection from web-based malware; this also limits the ability of any malware on your system to monitor your activities.

There is an option for the installation of a complete virtual desktop to provide a complete isolated environment that maximises the security. We appreciate this feature, although enigmatically, it needs Microsoft Silverlight installed to make it work strikes us a little, well, out there. Microsoft stopped their development of Silverlight, other than some random security patches back in 2013, and Google Chrome also stopped their support for this technology some years back.

The Comodo Dragon is a Chromium-based browser that is bundled with free Antivirus. There is privacy protection by disabling the data that Chrome typically uploads to Google, with additional security features for cookie blocking, forcing HTTPS connections, alerting on dubious SSL certificates, and more.

With Dragon on the job, Comodo rapidly approached being nagware with the incessant push for this browser, along with setting Yahoo! as the default homepage, and search engines in all browsers. After this went onto our radar during setup, we further discovered the program displaying two additional pop-ups at random times, both querying us for a change of our default browser, and one specifically could easily mislead a user into accidentally doing this.

It’s not all bad though, with Comodo Free Antivirus garnering favor for it Host Intrusion Prevention System (HIPS), a robust security layer that provides vast control over what applications can perform on your PC. The minimum is that it alerts for potentially dangerous actions by untrusted programs, like firing up an executable, and permits a decision whether each of these should be allowed to proceed or not.

Experts have the option to take this to the next level, and to define custom HIPS behavior rules, but this requires considerable low-level knowledge. Are you aware of the consequences of disrupting a process setting Windows event hooks, or what may occur if you stop interprocess memory accesses? At least for HIPS the default is for it to be turned off, so amateur users should not worry. Also, for those that know what they're doing, there's plenty of options to improve and fine-tune their system’s security.

Another neat feature includes complete integration with the Comodo KillSwitch, an improvement to the Task Manager with so many additional features that it should get its own review. One example is that the KillSwitch Repair option facilitates determining if malware has corrupted your HOSTS file, DNS settings, Explorer policies and more, and with a click can restore the defaults.

Comodo's Settings dialog completes the program with settings everyone will appreciate. Beginners can use it to choose a new theme on the interface, or to disable power sapping update checks when the system is on battery power. At the other end, power users can customise how their scans perform, the creation of new scan types, tweaks to the HIPS, and total control of most of Comodo's low-level operations.

Comodo Free Antivirus does not get tested by the majority of the independent testing labs, but AV-Test does examine Comodo's Internet Security Premium- with interesting results.

The December 2018 Windows Home User Report has the package achieving an impressive 100 per cent protection rate in both months, which is quite good news.

On testing, the Performance element shows website and application launches that were slower than the average with Comodo installed. So pokey, that Comodo ranked 19th out of 20 for Performance, but the question is how this really performs in real life.

For instance, the testing shows that if your favorite website took six seconds to load with no antivirus, this can slow down to seven seconds for the average antivirus product. Also, you'll be waiting just slight longer- seven and three quarter seconds - with Comodo, while it could be an issue, we really think this is not a deal breaker for the majority of users.

What's really critically important is the level of protection from Comodo, and we checked this further by matching Comodo against our own custom ransomware simulator. As it is homebrew, Comodo Free Antivirus cannot detect it via a file signature alone, thereby making this a quite intriguing product test.

We started the simulator, and went with Comodo's default option for running the program partly isolated- with limited rights on our system. The simulated ransomware did run to completion, but because it was in the sandbox, none of our test files were touched.

This is an impressive performance, considering this same approach will also block most other threats, whether established or brand new. But be aware that it does still require human intervention, with the user correctly designating which applications are safe, and which will need the sandboxing. While this approach is absolutely fine for experts, this is not great for the novice crowd, or others who may prefer the antivirus to be more automated and independent on this task.

A robust piece of antivirus software featuring some unusual and advanced elements. The interface does get complex, though, and some real technical expertise is needed for maximal benefit from the program.

Including plenty of powerful protection tools, however it takes some time, knowledge and experience to get it all working.