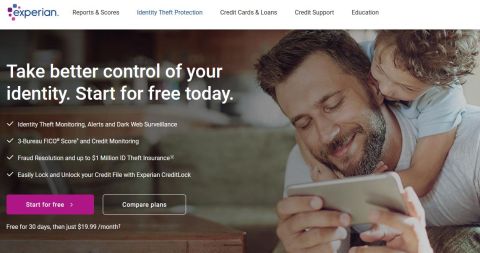 Experian IdentityWorks is a strong identity theft protection app that has powerful security tools yet remains accessible to all users. It also provides incredibly informative resources to help users take control of their own security. The only potential drawback is that Experian experienced a massive data breach in 2015 that led to 15 million compromised accounts.

Our series on identity theft protection apps will evaluate the features, pricing options, competition, and the overall value of using each app. However, these are not full hands-on reviews, since evaluating identity theft protection apps is almost impossible. It would require several months of testing, purposefully hacking accounts to see if the protection app works, handing over personally identifiable information, performing multiple credit checks, and risking exposure of the reviewer’s personally identifiable information.

Unfortunately, Experian is still linked with a disastrous data breach that compromised the company’s customer records in 2015. Information regarding more than 15 million customers was leaked, and Experian is still working to regain the trust of its audience. Of course, data breaches have affected numerous companies over the last five years and beyond, but it’s a notable issue for a service whose main selling point is keeping your information safe.

On the other hand, Experian does take security seriously and has implemented major steps to address the underlying issues. Whether the 2015 breach plays a role in your decision is ultimately up to you, but either way, it’s important to have all the information on hand before committing to an identity theft protection app.

Experian has a somewhat confusing subscription scheme, with plans divided by the number of adults, the number of children, and the amount of insurance. Surprisingly, the only two options are no kids or up to 10 kids. You can choose either one or two adults, and there’s no support for more than two adults on the same plan. Pricing ranges from as little as $9.99 for a single adult without children to $29.99 for two adults with as many as 10 children.

Once you’ve found the plan with the right number of users to suit your situation, you can choose from either a Plus or Premium plan. Plus users get up to $500,000 in insurance coverage to pay for emergency travel, lost wages, legal fees, and other expenses related to identity theft. Premium comes with a full $1 million. While most users never end up filing a claim at all, there’s something to be said for the peace of mind that comes with additional coverage.

Like some of the other top identity theft protection services, Experian clearly put significant resources toward developing an intuitive interface. The dashboard resembles platforms like Norton LifeLock, and there’s a wizard to help you take advantage of the features.

Experian also avoids the mistakes of PrivacyGuard and other apps that use an overly garish design that distracts from the serious nature of identity theft. Overall, IdentityWorks has one of the best interfaces among identity theft protection apps, simplifying a complex service and making it easy to find exactly what you’re looking for.

Along with a deep collection of informative resources, IdentityWorks also matches some of the most comprehensive identity theft protection apps when it comes to features. Unsurprisingly, it has basic security measures like credit and bank account monitoring, along with notifications when sex offenders move near your location.

IdentityWorks also goes beyond many competitors with a few unique features. For example, it monitors court records for any changes, and Premium users can even view their daily FICO score. It provides all the information necessary for users to be aware of red flags that could be evidence of identity theft.

While there are numerous identity theft protection apps available, it’s clear that Norton LifeLock is the top competitor to Experian IdentityWorks. Each platform is designed to offer comprehensive security, protecting against a wide range of attacks on your identity. One key difference between the two services is that Norton generally focuses on cybersecurity, while Experian is a credit reporting bureau.

Although their priorities are slightly different, they provide many of the same tools, and both are excellent options for most users. That said, Experian’s data breach is a major issue for its record as a trusted security brand. While we lean toward Norton LifeLock over Experian, they’re both among the top identity protection services in 2020.

We’ve gone with Norton LifeLock rather than Experian IdentityWorks for our holistic recommendation, as Norton is a proven security brand with decades of experience. Experian’s expertise in credit-related issues is important, but it doesn’t outweigh Norton’s ongoing reliability as an industry leader. Identity theft goes beyond financial issues, and it’s unclear whether Experian can compete with the top alternatives outside of that arena.

That said, Experian’s educational resources are second to none, and they’re a great way to learn about credit and other financial topics. Knowledge can help you take control of your online security, and IdentityWorks is an incredibly informative resource.

Experian IdentityWorks is a strong identity theft protection app that has powerful security tools yet remains accessible to all users. It also provides incredibly informative resources to help users take control of their own security. The only potential drawback is that Experian experienced a massive data breach in 2015 that led to 15 million compromised accounts.