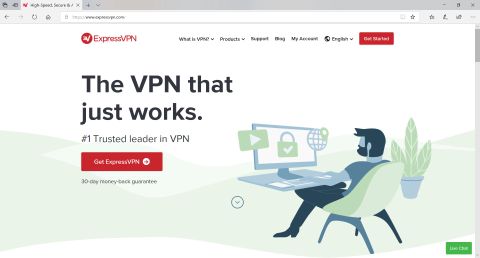 ExpressVPN is the closest thing to VPN perfection we’ve seen so far. It has it all - wide server coverage, strong security, top speeds, and access to Netflix. The price may be high but is proportional to the offer.

ExpressVPN is a provider of virtual private network (VPN) services that operates in the privacy haven - the British Virgin Islands. Behind the modest claim “The VPN that just works” hides a service that works on more than 3,000 servers in 160 cities across 94 countries all over the world. This makes ExpressVPN one of the largest VPNs in terms of server coverage, giving you access to servers even in some more exotic regions like Africa, the Middle East, South America, and more.

It also has substantial platform support, with apps for all the major devices, and then some. While it may not support a large number of concurrent connections (only 5), the service can be enabled on a supported router, bypassing this limitation and increasing the VPN coverage.

Every larger VPN provider has to provide access to at least some of the popular geo-restricted services. After all, it is one of the main reasons many users decide to purchase a VPN subscription in the first place. ExpressVPN excels in this area as well.

It provides limitless and unobstructed access to content libraries on Netflix, BBC iPlayer, Amazon Prime, Hulu, and more. As expected, secure sharing and downloading of large files via torrenting clients are supported on all of the provider’s servers.

ExpressVPN offers its services under three subscription options. The first is the 1-month option at a price of $12.95. It is followed by the 6-month subscription at $9.99 (billed $59.95 every 6 months) and the 12-month plan at $8.32 per month (billed $99.95 every 12 months). If you use our affiliate link to sign up, you can get an additional three months for free on the 12-month plan. Payments can be made using credit cards, PayPal, Bitcoin, AliPay, UnionPay, iDeal, WebMoney, and many other methods.

VPN providers seem to be moving away from the traditional free trial format, replacing it with generous no-questions-asked money-back guarantees instead. ExpressVPN is one of them. All of its subscription options carry a risk-free 30-day money-back guarantee.

This means that if you want to fully test out the service and have your money, you need to choose a pricing plan, pay for it, and request a refund within 30 days. The refund will be issued swiftly and without any problems, regardless of the reason for the cancellation.

ExpressVPN safeguards your privacy by deploying strong security mechanisms. These include the AES-256-CBC encryption with a 4096 SHA-512 RSA certificate, and the standard protocols: OpenVPN with TCP/UDP, L2TP/IPSec, and PPTP. Users can choose between these protocols or let the app assign the best one for your connection.

A kill switch feature, called Network Lock, shuts down your whole Internet access in the event of a sudden VPN connection breakdown. This efficiently removes the risk of your sensitive information leaking into the outside world. Network Lock is standard on the ExpressVPN apps for Windows, Mac, Linux, and routers. There is no kill switch for Android devices, but they can make use of their integrated options.

Blocking DNS requests to any other DNS server than its own allows ExpressVPN to provide an impervious DNS leak protection. The split-tunneling feature gives users the freedom to select which of their apps they want to put under the VPN connection and which they have to or feel comfortable leaving on their regular Internet connection.

The TrustedServer technology relies on RAM instead of hard drives, so all information on a server is wiped every time it is powered off and on again. This ensures security and minimizes the risk of vulnerabilities.

ExpressVPN has a strict no-logs policy. It states that the company does not and will never log IP addresses, browsing history, traffic destination or metadata, or DNS queries. The only information it does store is about the usage of its services and it cannot be used to match an individual to specific online activity.

This information includes successfully activated apps and app versions, dates (but not times) when you connected to the VPN service, choice of VPN server location, and the total amount of data transferred per day.

To prove its dedication to users’ privacy and security, ExpressVPN has brought in independent audit professionals from PwC who checked if its platform complies with the company’s privacy policy. The results can be found on the provider’s blog.

On top of this, ExpressVPN has a favorable location as the seat of its operations - the British Virgin Islands. It is a place outside of any intelligence-sharing partnerships and with no laws requiring data retention.

As mentioned, ExpressVPN supports a wide array of platforms. It has user-friendly apps for Windows, Mac, iOS, Android, and Linux, as well as custom firmware for certain routers. It also has browser extensions for Chrome and Firefox. The manual configurations and setup tutorials available on the website cover additional platforms, including Chromebook, Windows Phone, streaming and gaming consoles, e-book readers, NAS devices, BlackBerry, smart TVs, and more.

ExpressVPN prides itself with top performance in various areas. It connects quickly and hails blazing download speeds from most server locations, regardless of what you’re using it for. Expectedly, the best speeds are delivered from servers nearby. Slight latencies are possible when connecting to servers in places further away, but they don’t affect the performance much.

If you need help with anything related to the service, you can look it up in the large searchable support section or the company’s blog. If you still can’t find what you’re looking for, then you should get in touch with the company’s friendly and knowledgeable staff through live chat, email, or filing a support ticket. They are available at all times and will quickly respond to your query.

ExpressVPN is defined by its high speeds and plenty of options that even the VPN perfectionists will find more than suitable. Furthermore, its privacy policy and security features have been put to the test and passed with flying colors. The price tag may seem a bit high but this provider’s worth it.

ExpressVPN is the closest thing to VPN perfection we’ve seen so far. It has it all - wide server coverage, strong security, top speeds, and access to Netflix. The price may be high but is proportional to the offer.