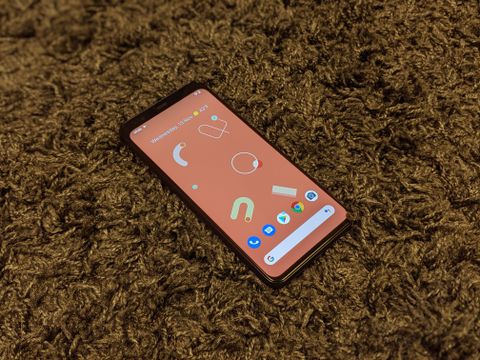 The Pixel 4XL is likely to age better (or mature faster) with new software updates, but unless you're after the best camera phone, its high price tag and and the quality of the competition make it quite hard to recommend Google’s new flagship.

Google has been involved in the production of smartphones for 11 years, with the HTC Dream kickstarting the Android revolution and the sale of billions of phones worldwide.

After the critically acclaimed Nexus family and the Motorola episode, Google settled on the Pixel brand for its smartphone line, with the fourth wave launched in October 2019. The flagship model is the Pixel 4 XL, which is available in white, black or coral, with its 64GB version costing £829 SIM free and the 128GB topping £929.

The Pixel 4 XL’s design language is all about simplicity, both in shape and in the colour scheme. The rear panel features no fancy 3D-esque iridescent colours like that seen on the Honor 20 Pro, just a good old, full black trim with - in our case - a pink orange back with two cameras and protruding LED flash lens.

Textured sides and frosted glass make the Pixel 4 XL easier to hold, far less slippery than a lot of the competition. There’s no fingerprint reader here, a sore point; you get a pair of downward firing speakers, one on each side of a USB type-C connector at the base of the device with the power button and volume adjustor located on the right and a SIM slot on the left.

The Pixel 4 XL features a large 6.3-inch OLED display protected by a layer of Gorilla 5 Glass and much to the glee of purists, no tear drop designs in sight. Instead, the front facing camera is well hidden on the black bezel, not unlike the Pixel 2 XL, a sort-of-return to simplicity.

Despite featuring a similar-sized screen to its predecessor, the Pixel 4 XL is slightly bigger by a couple of millimeters, with this extra space housing the radar hardware necessary for the Motion Sense feature. Note that the Pixel 4 XL is water resistant and carries an IPx8 certified rating although tear and wear and cracks will almost certainly compromise this.

Google generally considers hardware to be a second class citizen, the minor partner in a symbiotic relationship where the software is king.

The Pixel 4 XL is a showcase in support of that argument, being the latest (and probably last) flagship smartphone to sport a Qualcomm Snapdragon 855 system-on-chip. This is paired with a Titan M security module, a Pixel Neural Core engine, 6GB of RAM and 64GB onboard storage on the base configuration. Bear in mind that the OS takes a good chunk of it and that there’s no microSD expansion capabilities and the Pixel 4 XL looks suddenly under specced.

In comparison, the Xiaomi Mi 9T sells for less than a third of the price with the same RAM/storage combination. Granted it doesn’t have the same CPU but it gives you an inkling of what’s out here in terms of competition.

The 3,700mAh battery is a slight improvement on the Pixel 3 XL, with the newer device also sporting wireless charging for even more ways to power up.

The Pixel 4 XL’s 6.3-inch QHD+ flexible OLED display is one of the highlights of this phone with a pixel density (537ppi) that ranks amongst the highest on the market for devices of this size. Combine this with a higher-than-usual 90Hz refresh rate and you get a butter smooth experience that’s visually nothing short of stunning. The flipside though is the negative impact it will have on battery life; a 50 percent increase in refresh rate is still significant despite any tweaks that Google engineers might do.

A phone is just a piece of glass and metal without the software that powers it and nowhere is this truer than through the presence of the Google Assistant. This can be summoned by pressing both sides of the phone (a feature called Active Edge); which is a great idea in theory, but unfortunately doesn’t work when the phone is shoved in a casing.

Speaking of Google Assistant, the Pixel 4 XL is sporting a new, improved version of the tool which can handle speech recognition locally, using hardware on the device itself. This means that the device is faster, can work without being connected, great for not spots, and is better for privacy-obsessed users.

Security chores are handled in-house by Google’s dedicated Titan M hardware chip. On paper, that means that it is less likely for hackers to access your data, either when it is at rest or moving. On the other hand, the decision to take away the fingerprint sensor means that you have to rely on your memory for your PINs or for companies to gradually embrace Google’s Face Unlock technology, which to us feels like a big step backwards.

Then there’s the Google Recorder app which, single handedly, could wipe out the burgeoning speech-to-text app market by providing real-time transcription services for free and more.

Also worth noting it Soli, the technology behind Motion Sense, which adds radar capabilities to the phone within 60cm. When it works, it is fantastic, game changing but it was not flawless for us, meaning that we need a bit more time to get accustomed and/or a few more tweaks from Google.

A word about the camera; although this may not be at the top of the list of priorities for business users, one can be assured that the Pixel 4 XL ranks amongst the best thanks to a combination of astutely-chosen hardware components and the uber-polished camera app.

The Pixel 4 XL feels like an unbalanced phone, perhaps a deliberate strategy. On one side, it is shockingly expensive for a smartphone that offers only 64GB on its base model. In comparison, the Sony Xperia 5 retails for less than £700 despite having better specs.

But it is obviously not just about the hardware and Google knows a thing or two about software. The out-of-the-box Android experience is superb, shedding any sort of customisation that tends to bloat other flagship products. Being a Google handset also means that you will get the latest updates before anyone else with the added benefit of being an Android Enterprise recommended handset.

The rest though feels rough and lacking finesse; the face unlocking is temperamental while the gesture control (AKA Motion Sense) still needs extra work to make it an essential feature. Do remember that you will get unlimited photo and video storage in high quality (although Google cheekily mentions that they may get compressed and/or resized).

Google could go out all guns blazing, it really could, especially when it comes to pricing but then it may antagonise its closest partners who may not like Google’s ambitions. Instead, being the electrically controlled and propelled mechanical hare in a race means that it can control - to some extent - the pace of progress and showcase what’s coming next.

The Pixel 4XL is likely to age better (or mature faster) with new software updates, but unless you're after the best camera phone, its high price tag and and the quality of the competition make it quite hard to recommend Google’s new flagship.