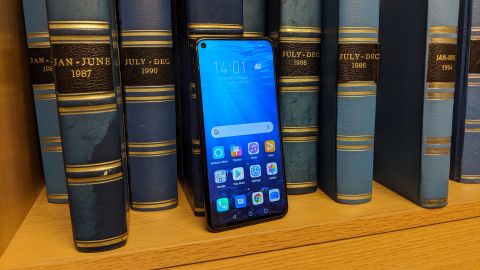 The Honor 20 Pro is intrinsically a superb phone with barely anything letting us down. Sadly, its retail price makes it hard to compete with devices - unless you absolutely need 8GB of RAM and 256GB storage.

After the Honor 20 Lite, the Honor 20, we’re reviewing the third (and final) member of the “20” series of smartphones launched earlier in 2019 by Huawei. With a suggested retail price of £549.95, it aims to provide a more affordable entry point to flagship status compared to the £1,000+ charged by rivals - including Huawei’s very own P30 Pro.

More of the same with the Honor 20 Pro. It embraces the same design philosophy of the other Honor devices we’ve tested recently. The model we tested was the purple one, you can also get the Honor 20 Pro in black.

It is just as good looking as smartphones of similar ilk with glass in the front and at the back. There’s very little difference physically compared to the Honor 20. Its dimension (154.6 x 74 x 8.4 mm) and its weight (182g) means that it is still very easy to manipulate with one hand.

There’s the power button that doubles as a fingerprint reader and above that the volume rocker. On the left hand side is the SIM tray that can accommodate two nano SIM cards in dual standby mode. It won’t take a microSD card; not really an issue as the Honor 20 Pro comes with 256GB of onboard storage as standard.

A single downward firing speaker and a Type-C connector are located at the bottom and an IR sensor can be found at the top. Interestingly, the status light is situated behind the speaker grill.  The front facing camera is an in-screen one and located on the top left of the display. Flip it on its back to reveal four cameras - three of which are on a raised strip - and a LED flash.

The hardware differences between the two models remains marginal. Less system memory and half the storage, a 2-megapixel depth sensor, an 8-megapixel telephoto camera with a 3X optical zoom and a slightly bigger battery (4Ah vs 3.75Ah).

Let’s get a few things out first. We prefer a flat metal or plastic back; practical over aesthetics. Having curved edges means that it fits one hand easily and provides a good grip for a comfortable prolonged holding.

We will prefer to have a case to protect it from bumps and scratches. While we understand the need for a raised strip to house the extra components and optics, one can’t ignore the fact that it could increase the damage caused during a drop.

The Honor 20 Pro has a slightly better hardware configuration compared to the Huawei P30 Pro (although the latter’s OLED screen is still by far the better of the two). So no surprise there when it comes to how powerful it is.

It is very fast, very very fast. Blasts through tasks like there’s no tomorrow and even if the new Qualcomm Snapdragon 855 is faster, the Kirin 980 is still a supremely powerful engine.

A useful feature is Easy Projection which allows the user to enable a desktop mode similar to Samsung’s Dex. This could prove to be a particularly useful feature for small businesses looking to improve productivity by enabling remote working. Support for Miracast Screen mirroring is essential and this feature works both wireless or through an HDMI cable.

Note that the Honor 20 Pro runs Android 9 and Honor’s very own Magic 2.1; and while we didn’t review the camera, the reference benchmark tool, DXOMark, bestowed a 111 score to it, on par with the OnePlus 7 Pro and just behind the P30 Pro, the Note 10+ and the Galaxy S10 5G.

Huawei has managed to copy Samsung’s biannual flagship release - Galaxy and Note - across two brands (P series + Mate, P series + View). That said, it does made the market far more crowded and complicated to navigate especially as last year’s flagships are still around and often at a much cheaper price.

The Honor 20 Pro is the top of the range model and slots above the View 20, the previous champion from the Honor stable. The latter is still available for £340 (albeit with 6GB/128GB), while the former can only be had from partners from £539.95. To make things even more complicated, there’s the Huawei Mate 2 Pro and the Huawei P20 Pro, both available for a similar outlay but with “only” 6GB of RAM and 128GB onboard storage.

As for the Honor 20, at £370, it is a worthy candidate should you consider spending less but still get the latest technology. How busy is that price range? Well, we haven’t even started to look at Huawei (Mate 20) and other competitors like Samsung (Note 8, Galaxy S9, Galaxy A70) or Xiaomi (Mi 9, Mi Mix 3, Mi 8 Plus).

All in all, the Honor 20 Pro is a fantastic smartphone that punches well above its price range. It challenges established players like the Samsung Galaxy S10 and the Huawei P30 Pro and yet comes at a significant discount compared to those two.

As for the ongoing feud between Huawei and the US, the company, which owns the Honor brand, has confirmed that “Anyone who has already bought, or is about to buy a Huawei smartphone, can continue to access the world of apps as they have always done. All devices continue to be covered by our manufacturer’s warranty and will receive full service support accordingly.” They have also confirmed that Android Q will be rolled out to 17 devices.

The Honor 20 Pro is intrinsically a superb phone with barely anything letting us down. Sadly, its retail price makes it hard to compete with devices - unless you absolutely need 8GB of RAM and 256GB storage.