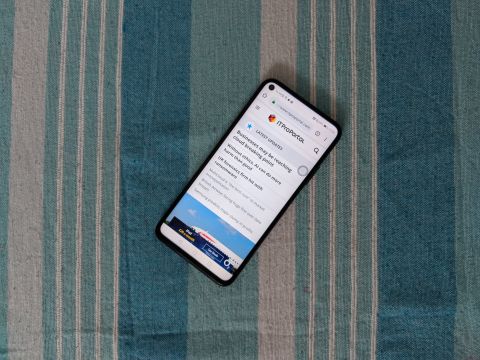 You will be very hard pressed to find a smartphone that can rival the Honor 20 at this price point, even more so if you are a compulsive camera user. It is fast, well designed and its only real weakness is its software.

There are currently nine smartphones in Honor’s UK line up with a tenth one, Honor 20 Pro, on the way. That one is likely to break the £500 mark but if you cannot fathom spending so much on one phone, then there’s its little brother the £400 Honor 20 which was unveiled in May 2019 alongside the £220 Honor 20 Lite.

This is a phone for those who want style and performance. As expected, it embodies most of the characteristics you’d expect from a 2019 flagship model. Glass-over-aluminum frame? For sure. Edge to edge display with a punch-hole notch on the left? You bet. Rounded edges that give it a pebble-like finish and make it easier to drop? Absolutely.

It is available in (midnight) black, (sapphire) blue and (icelandic) white colours. The glass finish is beautiful but is a pain to clean and maintain. Get yourself a casing or a sleeve if you don’t want to scratch or worst, smash it.

That’s particularly true as three of the four cameras the Honor 20 has at the back are on a protruding island at the back. Should the phone fall on its back on a hard floor, they will take the brunt of the impact. Speaking of the back, other than the Honor branding, there’s a fourth sensor located a few millimeters away from the LED flash.

On the four sides of the device are a status light, an infra-red port, a single downward firing speaker, a USB Type-C connector (USB 2.0 only), a side-mounted fingerprint reader that doubles as a power button, a volume rocker and a SIM tray.

It supports dual SIM and dual stand by but not microSD cards. As expected, there’s no 3.5mm headphone jack, no wireless charging mode and the Honor 20 doesn’t do water sports (no IP68 or MIL-STD-810G).

There’s a Hisilicon Kirin 980 part inside the smartphone, the same as the View 20. That’s a 7nm part that’s paired with a Mali-G76 MP10 GPU. Paired with 6GB of RAM and 128GB storage, it packs more punch than most entry level laptops on the market. Add in 802.11ac Wi-Fi, Bluetooth 5.0 and 3750mAh battery that features a fast 22.5W charging mode and you get a device that punches above its suggested retail price.

The display is another standout feature; it is big (6.26-inch), takes most of the front (about 84.2% screen-to-body ratio) and has a 1080 x 2340 pixels resolution which translates into a rather high pixel density and sharper than average pictures.

Colours are vivid and bright for an IPS display making good use of the edge-to-edge display. You will have no issue dealing with it in bright sunshine, albeit with the brightness slider moved to maximum. Whites were crisp with excellent contrast.

This is a fast smartphone; in our tests, the chip powering the Honor 20 is on par with the Qualcomm Snapdragon 845 found in the Samsung Galaxy S9. It wins most CPU benchmarks but lags behind when it comes to graphics or video-intensive; Qualcomm’s Adreno 630 Visual Processing Subsystem is still ahead of the competition it seems.

Despite this, the phone performed admirably; no hiccups, no sluggishness even when multitasking. The phone runs Android 9.0 with Android Q (10) expected to land next year. It runs Honor’s Magic UI 2.1 and at the time of writing, the latest firmware was 9.1.0.107 with the Android security patch dating from April 1st.

Honor is infamously known for throwing in a fair amount of bloatware and the Honor 20 sadly falls victim to that. Some of the applications - like Optimizer - can be useful when transparent and unobtrusive but others like HiCare are a bit less.

Then there’s a plethora of applications, probably about 20 of them, some which are positioned to replace their Google counterpart; think browser, email client, video, image gallery or even, ahem, an App Gallery. We don’t really see the utility of having Facebook, Amazon Alexa, Amazon or Booking.com preloaded. Give us stock Android over this any day (although we do understand that doing so removes the only visual USP any vendor would have).

There are, fortunately, other features like GPU Turbo, Screen Recorder, AppTwin, the navigation dock, PrivateSpace (basically a containerized space), App lock and Safe that are both useful and not-in-your-face. The phone takes decent pictures helped by a big dollop of AI technology (dubbed AI vision) and a grand total of five camera sensors (48, 32, 16, 2 and 2) to hit mind-boggling 100-million megapixel mark.

The Honor 10 retails for £249 which makes it an attractive alternative to the Honor 20. On the other hand, the £349 Honor View 20, with its 6GB of RAM, 128GB storage and 48-megapixel camera is equally compelling. And we haven’t even started to look at Huawei (Mate 20) and other competitors like Samsung (Note 8, Galaxy S9, Galaxy A70) or Xiaomi (Mi 9, Mi Mix 3, Mi 8 Plus). Clearly there’s a lot of rivals at this price point and just shedding a few pounds can - like in boxing - change your category and who you’re competing against.

But the Honor 20 will wow those looking for photographic excellence on a budget. It is probably not as good as the Honor P30 Pro but then again, it costs only £400. All in all, the Honor 20 doesn’t have much going against it. We’d love to have a headphone socket, a microSD card slot, two speakers and a bigger battery but prospective buyers will be happy with the balanced view offered by the Honor 20.

You can of course, opt for the Honor Pro with a slightly higher price tag (£599), a proper optical zoom, a bigger battery, 33% more memory and twice the storage.

Huawei, who owns the Honor brand, has confirmed that “Anyone who has already bought, or is about to buy a Huawei smartphone, can continue to access the world of apps as they have always done. All devices continue to be covered by our manufacturer’s warranty and will receive full service support accordingly.”. They have even set up a dedicated website to answer customer queries.

You will be very hard pressed to find a smartphone that can rival the Honor 20 at this price point, even more so if you are a compulsive camera user. It is fast, well designed and its only real weakness is its software.