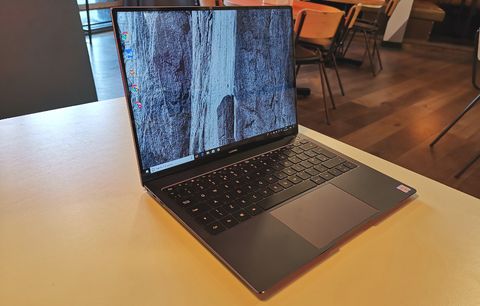 Huawei pulls off a massive surprise with one of the devices of the year.

Huawei has become a well-known force in the mobile world over the past few years, steadily expanding its reach to grow and become the world's second-largest smartphone maker.

Now, the company has extended its efforts into the computing space with its Matebook laptop line. Following the launch of the first-generation device in 2016, the Huawei Matebook X Pro was officially revealed at MWC 2018 earlier this year, and is now available to buy in the UK.

So can Huawei bring its mobile expertise take on the likes of Microsoft's Surface Laptop and Apple's MacBook Pro?

Huawei has made a name for itself when it comes to the design of their devices, with the company's recent smartphone releases all featuring a distinctive look and feel.

This idea has spread to the Matebook X Pro, which features a smooth polished metal deisgn that sets it up as a partner device for the company's recent Mate 20 Pro or P20 Pro handsets. And at just 14.6mm thick and 1.3kg, the Matebook X Pro is beautifully portable, meaning it'll easily slip into a shoulder bag or laptop case.

Opening up the device reveals the amazingly detailed screen which is something strikingly different from most other laptops around today.The Matebook X Pro sports a 3K LTPS display that comes with 3000 x 2000 resolution at 260 PPI, making it the perfect companion for HD-quality videos or images. The display, which makes up an incredible 91 percent of the body, is crisp and clear, with a full range of colours that make using the device very pleasant.

As has become the case with all Huawei's top-end products, the Matebook X Pro is beautifully designed and should prove to be a real head-turner wherever you are.

Huawei has set out to position the Matebook X Pro as a high-end device, which means it has included a hugely pwoerful hardware setup inside.

The version we reviewed was fairly close to top specification, featuring an 8th Gen Intel Core i7-8550U processor, along with 8GB RAM and 512GB SSD.

This meant that the device fairly zipped along with everything we threw at it, both in the office and also when out and about. The Matebook X Pro was able to juggle the myriad of multiple programs and apps you'd normally encounter in a typical working week, with no sign of slowdown or sluggishness at all.

The only slight downside we found was that the Matebook X Pro did seem to heat up a fair bit when coping with heavy workloads - far more so than other high-end laptops we've used. However with this amount of power inside, that may not be too much of a surprise.

The Matebook X Pro is powered by a 57.4Wh battery that Huawei says will provide up to 14 hours of battery life, which our tests found was fairly accurate, even with constant use. Recharging was also fast and easy via USB-C, although this did once again limit the amount of connection ports on offer.

Overall though, the amount of power within the Matebook X Pro is more than enough for a work or home environment.

As mentioned above, thanks to its super-powered hardware line-up, using the Matebook X Pro is a delight. Set-up took slightly longer than usual due to an extended biometric security process, as well as checking through Huawei's own terms and conditions, but once it was up and running, the user experience of the Matebook X Pro is smooth and seamless.

The Matebook X Pro screen really is unlike anything we've seen in 2018, providing a bright and detailed display that is almost akin to using a full-screen smartphone display - it seems to stretch directly into the corners, allowing a much more interactive experience.

This even extends to the touchscreen capability, allowing you to get hands-on with your work like never before, with an anti-fingerprint coating protecting against smudges. Huawei has also extended the touchpad on the Matebook X Pro, giving you more space to ensure you only touch what you need to.

The design excellence of the Matebook X Pro extends to the keyboard, where the keys themselves are beautifully crafted and have an intuitive interface, unlike other devices where typing for long periods of time can get uncomfortable.

As for the biometric login we mentioned above - this works well once set up, with the fingerprint scanner built in to the power button, allowing a quick sign in. Once set up, Huawei says the device can go from off to ready to work in 7.8 seconds - which we found to be slightly quicker than our experience, but if you need to get working quickly, is a super-helpful feature.

Alternatively, you can use Windows Hello's built-in facial recognition, which allows the Matebook X Pro's other unique design feature to raise its head - quite literally, as the device's 720p webcam is not in the display, but built into the keyboard, popping up to say hello when activated.

Once you are set up and ready, the Matebook X Pro comes with full Windows 10 capabilities, meaning all the usual Office and 365 offerings are ready and waiting. As with its smartphones, however, the Matebook X Pro does feature a selection of Huawei's own-brand software and services, most of which will be filed away and never opened - although the update-monitoring and alerts of PC Manager were useful in applying timely software downloads.

However the most significant downside to the Matebook X Pro is its cost, as this premium product comes with a very premium price tag. The base model of the device (which features an Intel i5) will set you back £1,299, whereas the mid-range model we used will set you back £1,499.99. Granted this is getting you an excellent device, and costs less than the equivalent MacBook Pro or Surface Book 2, but this price tag may still be too high for some.

Huawei has pulled off a major surprise here by revealing what could be the best laptop of 2018. Blending beautiful design with a simply stunning screen, all backed up with a great user experience and powerful hardware the Matebook X Pro is simply excellent all round.

The price tag may put some users off (particularly those of a previously MacBook persuasion) but this is a high-end device, and as always with Huawei's flagship products, if you can afford it, there is a lot to recommend here.

Huawei pulls off a massive surprise with one of the devices of the year.