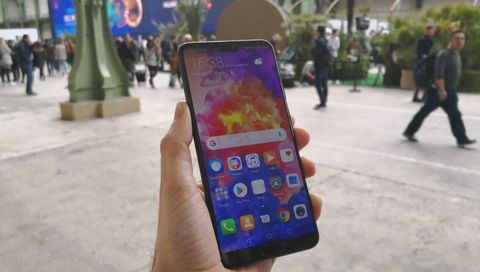 Huawei's best smartphone yet, but falling just short of perfection.

Huawei has continued its recent upward momentum with the launch of its latest flagship smartphone, the P20 Pro.

Unveiled last month at an event in Paris, the device is the stand-out of three new P20 range products, featuring an all-new triple-camera set-up, along with revamped design and the latest Huawei hardware.

But how does it stand up to our tests, and can it be the ideal workplace companion for you?

Following some criticism over identikit design for its past devices, it seems that Huawei has finally got the message, as the P20 Pro has received something of a makeover.

At just 7.8mm thick, the P20 Pro is thinner than the Samsung Galaxy S9 Plus (probably its closest challenger) and weighing in at 180g, also shades the bulk stakes too.

The P20 Pro comes packing a 6.1in AMOLED display with a resolution of 1080x2240 resolution, putting it ahead of the likes of the Samsung Galaxy S9 Plus. The addition of the notch now means the display extends over more of the front panel than ever before, with the device packing an astonishing 82 per cent screen to body ratio.

Most strikingly, the device now comes sporting an iPhone X-esque notch on the front display, bringing Huawei up to speed on the latest design trend - although what's on show here is significantly smaller than Apple's version. But what this also means is more screen for you - allowing for a bigger display which makes reading emails, typing replies, viewing documents and even watching video a much better experience.

The screen is incredibly detailed and beautifully bright, even in low-light conditions, and is quick and responsive to touch. That being said, the notch itself doesn't really add much for now, as many Android apps are still yet to be redesigned to consider the new form factor - although the upcoming launch of Google's Android P platform should solve this issue.

For all their plus points, both the screen and the glass rear panel are major fingerprint magnets, with the surfaces quickly becoming smudged in our usage. It's definitely worth investing in a case for your P20 Pro, not just for this, but also in case the rather slippery rear panel causes the device to slither out of your grasp - as we had more than one hairy moment.

As with all its recent flagship releases, Huawei has packed in a wealth of powerful hardware within the P20 Pro, making it one of the most impressive devices today.

The device comes packing the company's home-made Kirin 970 octa-core chipset (previously seen in the Mate 10), alongside 6GB of RAM and 128GB of storage, putting the P20 Pro right at the high-end of the market.

This boosted hardware means dealing with multiple apps and services at the same time is no bother at all, as we could switch between windows quickly and easily. Booting up the device is also a rapid process, but despite all this power inside, the Huawei P20 Pro rarely got too hot, unlike many other flagship products we could name.

Powering all this is a huge 4000mAh battery, which puts the P20 Pro ahead of the Samsung Galaxy S9 Plus and Google Pixel 2 XL.

During our tests, we regularly got over a day and a half's regular usage out of the device, meaning this is a perfect companion for working on the go. Recharging was quick and reliable when using Huawei's included cable, with the ability to restore 50 percent of battery life in just over half an hour's charging, however unlike Apple and Samsung's latest releases, there is still no wireless charging capability.

Huawei has positioned the P20 Pro as a device for consumers, largely due to the hugely impressive AI-based capabilities of the device's camera. Featuring a world-first triple-lens set-up, the 40MP rear camera of the P20 Pro is a major step forward for Huawei, building on its existing partnership with Leica to create something truly exceptional.

Taking photos in low light has been completely overhauled, with a new picture able to capture much sharper and brighter images than ever before, along with significant improvements to the Portrait and Apeture mode. Slow-motion video is also included for the first time, putting Huawei in direct competition with both Apple and Samsung as it looks to overhaul its deadly rivals, and there's a 24MP front-facing lens which makes videoconferencing a better experience than ever.

In summary, this is a majorly powerful device that will happily stay awake and alert throughout your working day.

With all that hardware power inside, Huawei needed to twin this with a user-friendly software experience - and for the large part, that is the case.

The Huawei P20 Pro comes sporting the company's own EMUI 8.1 software, built over the top of Android 8.1 Oreo. This means that all Google's most recent tools and services are present, including Google Assistant, as well as the full G Suite line-up to let you work on the go. However once again, EMUI comes with its fair share of unnecessary bloatware that most users will immediately hide away in a folder, never to be opened.

That iPhone X-esque notch also proves an issue for some apps as well, blocking off the top of the screen or display on more than one commonly-used app. The upcoming Android P release should go some way to helping ameliorate this issue, but for now, Huawei has handily included a display option that blacks out the very top of the screen altogether for those users unwilling to put up with such intrusion.

One of the best features about EMUI is its customisation, and the Huawei P20 Pro is no exception. The device comes with a wide range of Themes, allowing you to dress your device however you like, moving apps and folders around to make using the device a breeze.

Elsewhere, the Huawei P20 Pro also features the company's most advanced biometrics capabilities, with face scanning introduced alongside the usual fingerprint scanner. Using the face scanner is very straightforward, with set-up taking a matter of seconds, and unlocking then completed in the blink of an eye. As with previous Huawei devices, fingerprint scanning is also quick and secure, with the ability to add several different digits for extra safety.

Overall, although using the P20 Pro is much like using any other high-end Huawei device, the accessibility and ease of use means this is not a problem in the slightest.

The Huawei P20 Pro is by no means a perfect device, but in the hyper-competitive Android smartphone market, this is a seriously impressive offering.

Despite the high price, this is undoubtedly a premium device that should help Huawei make another major step into Western markets. Although admittedly a consumer-facing device (thanks to that insanely good camera), the P20 Pro also stands up well as a workplace companion, offering enough RAM power and battery life to ensure it won't let you down.

You could argue that the P20 Pro, with its massive battery and the best smartphone camera ever made, supersedes the company's Mate 10 Pro phablet device, such is the power within that super-shiny body.

Ultimately then, if you're looking for a super-powered Android device (albeit with a couple of Huawei-flavoured software tweaks) and are willing to splash out, there really aren't many other choices around today.

Huawei's best smartphone yet, but falling just short of perfection.