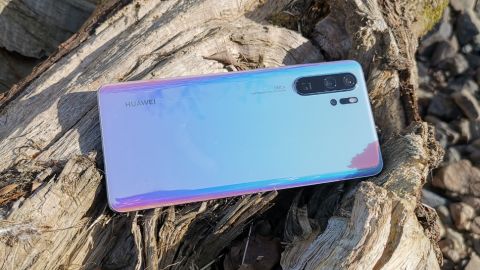 A superstar handset that won't let you down, no matter what you throw at it.

With the Android device market continuing to get ever-more crowded, the likes of Huawei have to ensure they go an extra step forward to stand out from the crowd.

The company's latest P30 and P30 Pro flagship devices offer the usual super-charged hardware and some seriously impressive camera capabilities, but how does it stand up to our tests?

As has become the case with many recent Huawei launches, the theme of the P30 Pro appears to be, "if it ain't broke, don't fix it".

The new device bears more than a passing resemblence to its predecessor, the P20 Pro, released almost a year ago, with similar dimensions and build.

Weighing in at 192g, the P30 Pro features a 6.47in OLED display that is superbly bright and colourful, as well as incredibly reactive and stretching across an almost impossible large proportion of the front face.

The Huawei P30 Pro does sit quite comfortably in your hand, but given the screen size, it may be a stretch for some users looking to use it with one hand. It's also just about pocket-sized, however keeping it there for long periods of time may prove a bit uncomfortable.

Once again, the fingerprint scanner is embedded within the front display (but more on that later) meaning you may get a burst of smudgy finger marks on the screen to begin with as well.

However the rear of the device features a blast of colour not seen in the smartphone market since Apple's iPhone 5C.

This is no plastic coating though, as the rear of the P30 Pro features a glossy surface that is either stunningly eye-catching or rather off-putting depending on your preference (I've had both reactions with the Breathing Crystal edition provided to us).

As well as dividing opinions, this design does make the P30 Pro somewhat slippery to handle without a case, so consider investing in a grippier alternative to the basic plastic skin provided in the box.

On the rear is the Leica camera that has grabbed so many headlines thanks to its super-powered 50x zoom - this creates a slight rise on the otherwise flat rear panel, but nothing too noticeable.

Overall though, this is a beautifully-designed device, and one that is sure to be the envy of the office.

It goes almost without saying that the P30 Pro features the company's most powerful mobile hardware, but what's not quite so clear is just how good this device can perform.

With the latest Kirin 980 octa-core processor backed up by 8GB of RAM and 128GB on-board storage, the P30 Pro is an absolute power beast, making it ideal not just for work, but for entertainment and gaming as well.

The device is easily able to support a wide range of apps all at once, skipping between documents, camera, media and web browsing quickly and smoothly. We found the Wi-Fi and mobile connectivity was fast and responsive, with uploads and downloads connecting and updating without any issues.

Powering all this hardware is a huge 4200mAh battery (up from the 4000mAh unit in the P20 Pro) that will easily last all day, even with the amount of usage an everyday working or relaxing day will throw at it.

We didn't encounter any overheating during our tests, even when putting the device under some serious pressure, which is good news for heavy users.

Recharging is quick and easy thanks to Huawei's speedy recharge function, which can restore as much as 70 percent of battery life in just 30 minutes, and as with the Mate 20 Pro, the P30 Pro can act as a reverse charger for your other Huawei devices.

All being said, this is a device that will easily handle the strain of everyday tasks - as well as a little extra as well.

All this hardware power, coupled with the beautifully polished design, really does make the P30 Pro a stand-out device.

As with all its releases, Huawei has equipped the device with its own spin on the latest version of Android, meaning there's EMUI 9.1 on top of Android 9.0 Pie present here.

That does mean there's the usual collection of Huawei-made bloatware, most of which you'll likely never use, but can be quickly hidden in a folder to be stored away. All the usual Android favourites are present and correct though, so if you're a G Suite user you'll be able to hop it and get working right away.

Elsewhere though, using the P30 Pro is smooth and pleasant, as you can zip through menus and betwen apps with ease, the device showing no sign of stuttering or slowdown. Unlocking is once again enabled through a fingerprint scanner built into the screen itself, with Huawei thankfully lowering the scanner a few centimetres from where it was located on the Mate 20 Pro, making unlocking speedier than ever.

Much has been said about the P30 Pro's camera, particularly its insanely developed 50x zoom - but in reality there as very few use cases for this gimmick right now. However the P30 Pro camera is hands down the best we've ever used, providing hugely detailed snaps even in low light, making it the perfect photography companion for all users.

From end to end, this is a top quality device that can easily handle whatever your day throws at it, and do so whilst maintaining a high level of performance throughout.

Huawei's smartphones continue to impress, with the company pulling out all of the stops in recent years for its releases.

That's certainly the case with the P30 Pro, which is by far Huawei's most powerful, most advanced and best smartphone to use to date. From a stylish design to a stunning screen and unbelievable battery life, the P30 Pro is without doubt one of the best mobile devices on the market today - if not the best.

A superstar handset that won't let you down, no matter what you throw at it.