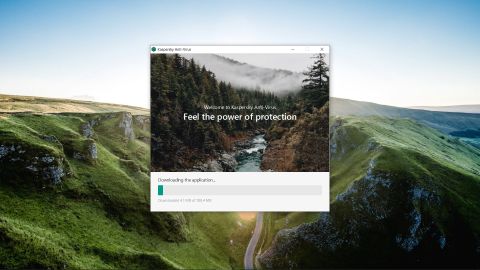 Kaspersky Lab, a world-famous cybersecurity and antivirus firm that has been around since 1997, offers a range of robust antivirus products for different users which come with a 30-day free trial available for those who wish to wet their feet first before making a full commitment to buy any of them. The products include Kaspersky Anti-Virus, Kaspersky Internet Security, Kaspersky Total Security, and Kaspersky Security Cloud, all of which we’re analysing in this guide.

The company’s entry-level security suite is called Kaspersky Anti-Virus and, as expected, it offers only basic features. This means essential antivirus detecting capabilities that include both old and new malware, as well as filtering of suspicious websites.

The 2020 version of this product adds communication via HTTPS, monitoring your passwords’ strength when signing up on websites, as well as restarting the Windows Base Filtering Engine if it crashes.

Upon opening, Anti-Virus’s user-friendly interface will present you with cleanly displayed options - starting scans, checking the reports, updating the virus database, or launching an on-screen keyboard which protects against keyloggers.

The Privacy Cleaner tool monitors against Windows and apps recording your activities, be it cookies and browsing history or recent programs and folders or Recent Documents and so on. Finally, Kaspersky Rescue Disk feature allows you to boot your device in a protected environment to get rid of deep threats that are especially tricky to remove.

One licence that covers up to three devices for the first one-year term will cost you only $23.99. After renewal, the price will increase to $60. If, however, you decide to trust Kaspersky Anti-Virus with your device’s security for a longer period and on more devices than that - say, on five devices during three years - the first term will carry some savings, costing $120 during the first period, increasing to $240 upon renewal.

If your paid version expires, you can simply switch to Kaspersky Free, which means you’re not left unprotected at any time. Do note that this option isn’t available in all locations and you can’t see on the Kaspersky website which these locations are.

Expanded service than what is seen in Anti-Virus can be acquired through Kaspersky Internet Security. It adds features like an intelligent firewall that quietly guards you against network attacks and lets you choose which of your apps can connect to the Internet, a secure and isolated browser called Safe Money for your banking and other transactions, as well as a webcam defence module.

There’s also an efficient spam filter that blocks all the junk trying to flood your email inbox, although you’ll have to enable it yourself. Add to this the basic Safe Kids module, the Private Browsing feature that defends you against all sorts of web trackers and a Software Updater to deal with all the missing patches, and you’re getting quite the package.

Unlike its lower-level cousin that can only be installed on Windows, this product can be installed on Mac and Android as well. The Android app includes automatic scans, anti-theft and anti-phishing protection, and an app locker, while the Mac program offers pretty much the same deal as the Windows one.

Kaspersky Internet Security one-year licence for three devices costs $31.99 for the first term, rising to $80 when renewed. If you opt for a three-year licence on five devices, its price tag during the first billing cycle will be $107.97, after which it will increase to $270.

Kaspersky Total Security takes all the features and protection from Anti-Virus and Internet Security and moves them up a notch to create a comprehensive security system. Namely, it adds a solid password manager (for Mac, Windows, and Android), a set of Safe Kids parental controls, as well as a backup option for Windows.

The password manager comes with other extras that include a secure photo vault and an auto-filling feature for faster input of credit card details and addresses. The Total Security pack’s simple Windows backup tool allows you to run basic local backups.

For those whose security requirements exceed those covered in the Total Security, Kaspersky Security Cloud might be the answer. It throws in intelligent ‘adaptive protection’ technology that has multiple options you can use according to your needs.

These options include, among others, checking if your passwords are too weak, recommending a change of password on a regularly breached website, or suggesting it launches its VPN if you’re trying to connect to an unsecured Wi-Fi network or the secure browser if you need to enter your credit card information. It can also remove junk on your device and optimise its performance.

Although its extras might be less powerful than those offered by a few competitors, Kaspersky’s 2020 range features one of the most accurate antivirus engines in the industry that is effective even against zero-day threats, a solid selection of efficient options, and plenty of choice in terms of licencing and number of protected devices.