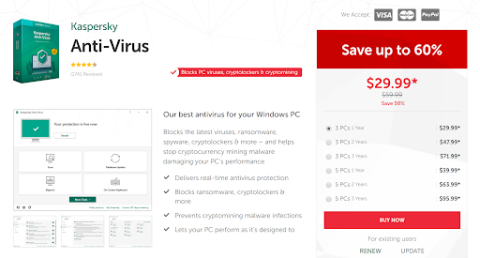 Kaspersky Anti-Virus is a great tool for keeping your Windows machine safe. Although it may lack the snazzy design of newer antivirus programs, its numerous security features will help you stay safe both online and offline.

Kaspersky Anti-Virus, also known as KAV, was launched released in 1997, back in the early days of computer viruses. But Kaspersky Anti-Virus 2020 remains relevant today thanks to its cutting-edge anti-malware engine and solid Windows 10 performance.

Before diving into this review, it’s important to mention that Kaspersky products are not approved for use by US government employees. There have been some reports of inappropriate collaboration between Kasperksy and Russian government security organizations. The company denies these but has since moved its data storage to Switzerland and other neutral locations.

Kaspersky Anti-Virus is a Windows-only product, and its price varies with the length of license and number of devices you want to be covered. The base price is $29.99 for a three device license for a single year, while $95.99 will get you a five device license for three years.

The Kaspersky Anti-Virus platform promises to keep your computer secure from all manner of different virus sources. First off, the usual file-based scans are part of Kaspersky Anti-Virus, and the local agent continually updates virus signatures without any user intervention.

The product can also scan incoming web traffic and block network attacks. When you run the Windows installer, Kaspersky Anti-Virus automatically installs a browser extension to Google Chrome. If you use Internet Explorer, you’ll be prompted to install and enable a browser extension for it too.

Of course, lots of viruses infect PCs by latching on to direct communication messages. That’s why it’s great that Kaspersky Anti-Virus scans all incoming and outgoing emails and blocks any that seem suspicious. But that’s not all. Your Skype, WhatsApp, and other instant messaging services will also be monitored to check for trojan attachments.

Kaspersky's engine for detecting and removing malware is consistently rated well by reviewers, and while some competitors can match its performance, none can surpass it. AV-Comparatives recently tested PC security products from ten vendors, and Kaspersky Lab achieved the best virus detection rating.

Besides antivirus threat removal, Kaspersky Anti-Virus comes with a whole host of other features to help keep your information secure online. For example, the platform includes a Password Manager that encrypts and syncs your login information across different devices.

A VPN, Kaspersky Secure Connection VPN service, is also included with the product. However, it is limited to 200MB of data transfer per day, which is quite impractical for most people. You can remove that limit for $30 per year, which is still pretty cheap for a VPN product.

An on-screen keyboard feature comes standard with Kaspersky Anti-Virus too. Its purpose is to defeat keyloggers when typing out sensitive information such as banking credentials or credit card information. On the subject of privacy, you must be able to trust your antivirus vendor. We recommend that you research the issues between Kaspersky Lab and the U.S. government for yourself before committing to this product.

When you first install Kaspersky Anti-Virus, it’s recommended that you perform a full system scan for malware. On our Windows 10 64-bit Pro test machine with four 2.7GHz processors and 8GB RAM, a complete scan of under 13 million files took about 21 hours.

During the scan, there was no noticeable performance degradation and we were still easily able to use our system for other things. However, although we didn’t notice the impact on our system, we were able to measure it through an Excel benchmark. It showed that, during the scan, our task completion time rose by 18%.

Kaspersky AntiVirus integrates nicely with the Windows 10 system interface. Once installed, you can access your Kaspersky software through the “Windows Security Settings” and then the “Virus and Threat Protection” menus.

The overall user experience can be described as functional and intuitive. With its minimalist vibe, Kaspersky’s design isn’t particularly attractive to the eye, but it remains very easy to use, with clear fonts and straightforward layouts.

Although Kaspersky Anti-Virus is available for purchase as a standalone piece of software, the developer, Kaspersky Lab, appears more focused on selling Kaspersky Security Cloud, a service-based security solution. Frustratingly, as a consequence, you’ll sometimes get popup messages with Kaspersky Anti-Virus, encouraging you to upgrade.

Installation is straightforward, particularly if you are a seasoned Windows user. Around 175MB of data needs to be downloaded which shouldn’t take long if you have a fast connection, and we were able to get up-and-running in about 10 minutes.

Because of the wealth of information available online, we found the answers to all of our Kaspersky Anti-Virus questions without contacting support. There is an extensive knowledge base on the Kaspersky Labs site along with a community forum. A browse of the forum threads revealed that users are generally happy with the stability of the product and the support they receive.

But if you need more direct assistance, Kaspersky agrees to provide full support for home use products regardless of license status. Technicians are available over the phone from 7 a.m. to 1 a.m. Eastern Time.

Despite its age, Kaspersky Anti-Virus is a robust solution for detecting, suppressing, and removing most forms of malware on Windows. It’s a quick and straightforward product to install and is worth considering for its security and privacy features.

Kaspersky Anti-Virus is a great tool for keeping your Windows machine safe. Although it may lack the snazzy design of newer antivirus programs, its numerous security features will help you stay safe both online and offline.