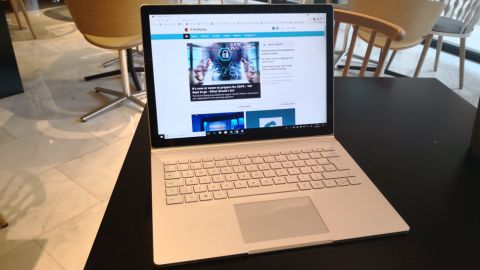 The Surface Book 2 builds on its predecessor's strong pedigree, making it one of the best high-end laptops around today.

Microsoft's entry to the PC device market in 2015 was initially met with suspicion by many industry observers.

However following the success of the company's Surface Pro line, the initial success of the Surface Book laptop was the result of an attractive design twinned with some seriously powerful hardware.

Now that the second generation device is available in the UK from £1499, what upgrades and improvements has Microsoft bought to make sure the new Surface Book 2 is able to be a useful working tool as well as an everyday PC device?

Microsoft hasn't made many changes when it comes to the look of the Surface Book 2, keeping to the bold, monochrome design that stood it on good stead with the original device.

Weighing in at 1.53kg, the slimline Surface Book 2 is extremely portable, and can be easily carried in your hand or a small bag.

The device one again features Microsoft's eye-catching hinge design, allowing for a more user-friendly experience when extended fully. This is still an attractive addition, but does mean there is a slight gap between the two parts when the device is closed, which could be a possible spillage risk.

Another feature ported from the original device is the ability to detach the screen of the Surface Book 2 to use as a tablet, allowing for even more portability. Detaching is done by holding a button on the keyboard, which releases the screen after a few seconds - with reattaching a simple process thanks to the magnetic connection.

Usefully, Microsoft has imbued both parts of the Surface Book 2 with their own battery, meaning a major extension in the potential life span of the device. This is extremely useful if you have taken away the detached screen to use for some time, say for showing a presentation, and then need to continue working without the need to desperately scrabble around for a charger.

However this does means that recharging the Surface Book 2's battery can take a long time, with a full recharge requiring several hours - not the most ideal if you're looking to leave in a hurry. Overall though, our time with the Surface Book 2 found that the device could easily last through an entire working day.

With a price tag that high, the Surface Book 2 should pack a serious hardware punch, and it certainly does.

The model we were given was powered by an Intel Core i5-7300U processor clocked at 2.60GHz, backed up by 8GB of RAM. That alone means that the Surface Book 2 is a seriously speedy offering, handling everything we threw at it.

Starting up the device is incredibly quick, booting to the Windows login screen in a matter of seconds, meaning you can get up to speed and working with no delay. Having put the device through a number of work-heavy days, the Surface Book 2 was able to cope with multiple programs, apps and more, including HD media, browsing and collaborative working.

As mentioned, the Surface Book 2 comes with a dual-battery build, allowing for all-day juice, even with all the tough workplace tasks within our test. If you do feel the need for extra efficiency, or even performance, Microsoft allows you to bump up either attribute though the power management menu, meaning you can easily eke out more battery life when needed.

The 13.5in PixelSense display is incredibly bright and clear, thanks to a 3000x2000 resolution that equates to 267ppi. Although possibly more useful for graphics-heavy use cases such as graphic design or video editing, this super-clear screen was also great for watching films and for high-definition video-conferencing - something helped by a 5MP 1080p front camera.

The Surface Book 2 also comes optimised with the new Microsoft Surface Pen, which allows a new level of interactivity with the device. Although the device has a 10-point touchscreen, the Surface Pen lets users carry out tasks such as quick annotating on presentations, or quick scribbles for designers or artists.

Overall, the Surface Book 2 builds on the incredible power found in Microsoft’s original device, and proved itself to be an extremely capable work companion

As a device designed to cover several different customer bases and use cases, the Surface Book 2 is incredibly easy and comfortable to use.

Along with all the hardware power within, the device is imbued with Microsoft’s latest build of Windows 10 Pro, meaning that all the usual workplace tools such as Word, Excel and Powerpoint are included. Cortana and Windows Hello are also present and correct, giving an extra level of security for your work device, and also a smart assistant to help you out when needed.

The Surface Book 2 has kept the excellent keyboard layout from the original device, meaning that typing is comfortable, no matter your speed. The trackpad has also been slightly largened, giving you more control over your interaction - which when coupled up with the Surface Pen, means you really can go hands-on with the device.

We’ve already mentioned the Surface Book 2’s detachable display, but it really helps the device stands out when compared to the competition. Whereas a removable design can seem gimmicky in other products, in the Surface Book 2 it genuinely adds an extra dimension to how you use the device.

Being able to quickly detach the screen and enter tablet mode, without needing to worry about a drop in performance or battery life, makes the Surface Book 2 a superb companion for workers on the go.

Microsoft may have turned heads when it first released its own PC hardware, but there's no denying that the company's products can now take their place at the top of the PC pile.

The Surface Book 2 is one of the most impressive workplace laptops we've used recently, balancing a stylish and extremely portable build with some incredibly powerful hardware.

Although the slow recharging may be an issue for some, and the price a little too high for many, the Surface Book 2 has a lot to recommend it for, and would be an ideal additional to any home office or workplace.

The Surface Book 2 builds on its predecessor's strong pedigree, making it one of the best high-end laptops around today.