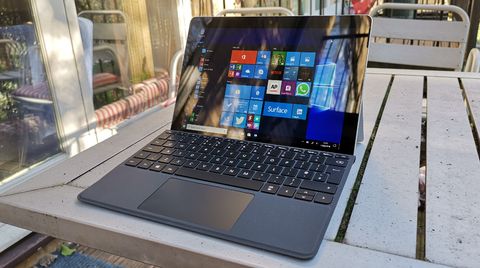 Microsoft's most portable device to date, but don't expect too many bells and whistles.

Microsoft has enjoyed great success with its Surface hardware line since the initial launch in 2012. With the company's Surface Pro and Surface Laptop devices now firmly established at the high-end of the market, the company recently revealed the Surface Go - a pocket-sized, wallet-friendly iPad-killer that looks to offer unmatched portability at a lower price.

So how does the Surface Go stand up to our tests?

The Surface Go is built to be portable, and its lightweight build makes it the perfect companion if you're short on bag space - or just fancy going solo.

Weighing just 520g and 8.3mm thick, the Surface Go will slot into most rucksacks, messenger bags or even coat pockets with ease, without the usual feeling of lumping around your usual work hardware.

The device sports the hinged kickstand that has become part of the Surface design, allowing you to prop up the Surface Go on any flat surface up to 165 degrees.

The Surface Go comes with a 10in 1800x1200 PixelSense Display, but also some pretty hefty bezels, which definitely cramp the view of the screen somewhat, but show off the 3:2 ratio Microsoft says is optimsied for a better input experience.

What screen there is though is bright and responsive, with 10-finger touch capability for when you need to quickly scroll or swipe on the move. Teaming this up with a Surface Pen (not included, but more on that later) makes this a fully interactive device that does away with the need for a mouse altogether.

Overall though the feel is, as you might expect, fairly basic - but this is a solid-standing device that will be able to travel anywhere you might take it.

For such a small size, the Surface Go actually packs a fair punch when it comes to hardware. In that thinline body, Microsoft has included an Intel Pentium Gold 4415Y processor and your choice of either 4GB or 8GB RAM, and 64GB eMMC or 128GB SSD stroage.

This means that the Surface Go is able to cope with a fair workload, adequately juggling multiple workplace apps and programs put to it in our tests. Powering all of this is a battery that Microsoft says provides up to nine hours of battery life - and our time with the device found this to be pretty spot on, with the device easily lasting a full working day.

With its smaller size comes a bit of a dearth of connectivity, as Microsoft seems to envisage that Surface Go users will not be carrying around other gadgets with them. The device comes with a single USB-C port, but also a SIM-card reader for those looking to stay connected on the go.

There's also Bluetooth and LTE connectivity as standard, which should held with the lack of ports somewhat, as well as an 8MP rear camera and 5MP front-facing lens - which with its 1080p HD video was built more for videoconferencing and Windows Hello than its photographic capability.

It's worth noting that as usual with Surface products, accessories are sold separately - in this case, Microsoft supplied us with a Surface Type Cover and Surface Pen to use (more on them later) but normally these will set you back a fair bit more.

Ultimately, it seems that Microsoft has tried to pack in as much hardware power as it can, whilst maintaining the lightweight and portable spirit that the Surface Go wants to aim for.

As you'd expect, Windows is front and centre when it comes to the Surface Go, which runs either Windows 10 Home or Pro in S mode depending on your model - although this can be switched out if you need to.

This starts with a full Microsoft 365 login upon start-up, with Windows Hello offering extra biometric security. There's also support for all the usual Office 365 tools, with the likes of Word, Excel and PowerPoint all running smoothly.

As mentioned above, using the Surface Go is pretty seamless, as despite its low-end hardware, the device can easily handle most everyday tasks thrown at it without much sign of slowdown.

However due to the cramped display, using the Surface Go in desktop mode can be slightly constricted, as the start menu takes over most of the screen. It's a complaint that could be levelled at several other common apps as well, almost as if Microsoft has simply shrunk down the UI from bigger devices without thinking of the effect this might have on the cramped 10in display here.

As for the accompanying accessories, it's a shame the Surface Go does not include wither the Surface Pen or Type Cover, as to get the most out of the Surface Go, you really do need the functionality that the keyboard and stylus bring to the device.

Much like many of its Surface products, the excellent Type Cover is a joy to use, responsive and yet still comfortable to type on, even for long spells. The Surface Pen was of less use to the typical day-to-day tasks we encountered when using the Surface Go, but Microsoft is keen to promote the wide variety of apps and services that it can enrich.

When it comes to mobility, the Surface Go stands far ahead of the competition. Small enough to fit into your coat pocket, yet with enough juice to last through a whole working day, there is a fair bit to recommend it for.

However it is not a polished device - without the Type Cover, and compared to its bigger brothers, or even (admittedly more expensive) competitors such as the iPad Pro, the Surface Go looks basic by comparison.

It's clear that Microsoft is trying to make a bold stab at undercutting Apple's iPad, as well as smaller editions of devices such as Lenovo's Yoga PCs, but as with most first editions, there's still work to be done.

If you're in the market for a cheap (the baseline model can be yours for £379), basic, yet oddly endearing workplace companion, then the Surface Go could be the device for you - for any other slightly bigger frills (and thrills) you're better off digging deep and going for the Surface Pro.

Microsoft's most portable device to date, but don't expect too many bells and whistles.