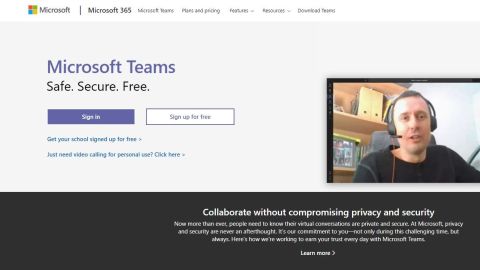 When it comes to software, with great power comes great confusion. Microsoft Teams is one of the most powerful collaborative messaging apps and also the hardest to learn because there are so many features. Unlike Slack, Glip, and a host of competing apps for messaging and calls, Microsoft Teams emphasizes advanced collaboration within a company of 5 or 50,000. That makes it incredibly appealing, although the caveat is that people might hate it.

Microsoft Teams is the powerful, exhaustive, and somewhat perplexing collaborative messaging app for small and large companies alike. It’s the exact opposite of Slack, which is designed for simplicity and instant communication.

For companies that need incredibly extensive features, high-end security, and instant voice and video chat, it is a top-end product. However, it also tends to go against the normal mode of collaborative messaging in that it can be confusing and unwieldy for everyday workers trying to connect more effectively with colleagues.

Microsoft took the “throw in the kitchen sink” approach to Teams, and as a reviewer, my tastes tend to be more in line with apps that have a streamlined interface. I prefer simplicity and quickness, and then to slowly discover more powerful features. Having just reviewed Glip (a product made by RingCentral), it’s a stark contrast. Glip is made for busy people who don’t have time to learn new things. Microsoft Teams is made for people who already use Microsoft products and are used to seeing the toolbars in Microsoft Word.

When you first start Teams, it can be daunting to even learn the interface vernacular. There’s a button called Teams where you can interact with a group of people and start a chat, share files, and make calls. Yet, there’s also a Chat button where you can do roughly the same thing. And, as if that’s not confusing enough, there’s also a Calls and Files button. The truth is all of these sections lead to the same result: more interactions with your staff. They help you focus on the task at hand, such as sharing files or making voice or video calls. As such, Microsoft Teams tends to use an approach where all roads and all features lead to more communication. That is also its biggest flaw, because it feels like the product could use some serious streamlining.

Microsoft Teams is highly extensible, incredibly rich, and well-connected to other Microsoft apps. You can almost hear the laughter of engineers in Redmond smirking and joking about Slack as a “competitor” when there is no comparison in terms of features.

Even on one page of the Microsoft Teams website covering security features you can investigate over 20 features such as compliance policy enforcement and labels to flag information security level. If you use Teams to record a meeting, you can determine who can watch the recording later. When you do decide to record a meeting, you can include a consent notice to be recorded.

The danger here is to slip into a mode where we only discuss the hundreds of features in Microsoft Teams -- everything from the extensions for file storage services to the integrations with the Microsoft back-end, or the security features that can help with regulatory issues, or the seamless video chat that appears within the app itself and even lets you leave a voicemail.

I’ve already said it and I’ll say it again: Because Microsoft Teams is so powerful and has so many ways to collaborate in a large company, it might be the perfect fit for your organization. You might need the regulatory controls; you might love the extensibility. However, it is also not the right fit for a small nimble company that really needs a better way to communicate.

The most glaring issue with Microsoft Teams is obviously the fact that other apps like Slack and Glip are far easier to use and understand. Employees will love them. You could easily argue that the more simplified messaging apps help us communicate faster and easier. That’s such a sound argument that it means even this powerful and extensive app deserves some heavy criticism - it is confusing to use and laborious to learn. It’s not for everyone.

And yet, Microsoft Teams is designed for both small and large companies - it is for “everyone” in that sense. There may be some of the same features such as video calling in Slack or Glip, but the comparison list starts to look rather ridiculous when you start poking around.

The truth is, Microsoft Teams feels like too much in an age when we need streamlining and simplicity. I cringe to think about a company trying to deploy this to a group of remote workers who are already confused about life and which software to use. I hate to think of the employee training required for new folks who barely understand how to use Outlook (meaning, they prefer Google products) and are still learning the Office products.

And yet, here’s where the rubber meets the road. If you need to make a 50-page document with a table of contents and an index, and do some extra formatting with graphics, then Google Docs is the wrong app -- most of us would use Microsoft Word. The same is true with Teams. If you need extra security, fluid video and voice chat features, connections to your existing back-end documents, access to the company calendar and contacts, and a long list of other reasons, then Microsoft Teams is perfectly suited for many companies. It has so much power that Slack starts to seem like a text messaging app that lets you share files (because that’s kind of what it is).

You could argue the same about Adobe Photoshop -- it is hard to learn. Some people might balk at the idea of learning about layers or the clone tools. Yet, they can help you edit complex photos. Microsoft Teams is the Adobe Photoshop of the collaborative messaging space. If you need all of the power and security for your company, there is no other choice.

When it comes to software, with great power comes great confusion. Microsoft Teams is one of the most powerful collaborative messaging apps and also the hardest to learn because there are so many features. Unlike Slack, Glip, and a host of competing apps for messaging and calls, Microsoft Teams emphasizes advanced collaboration within a company of 5 or 50,000. That makes it incredibly appealing, although the caveat is that people might hate it.