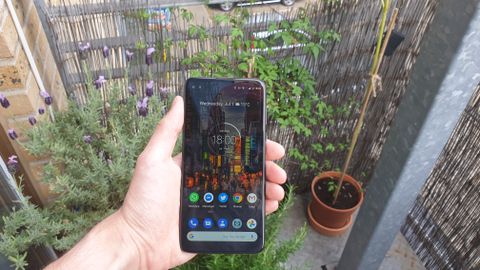 The Moto G Pro is a mid-range smartphone that feels like a much more expensive device, offering great value for money. It doesn't boast the kinds of extras you'd expect of a top-end phone, but does sport an impressive camera and striking colour scheme.

The Moto G Pro (known as the Moto G Stylus outside of Europe) is the latest in Motorola’s line of affordable smartphones - but that’s not to say it doesn’t feel premium.

Available for only £285.34/$269.99, this smartphone delivers exceptional value for money, with a smooth performance thanks to a solid set of specs, a handsome aesthetic and impressive camera.

It’s available in one colour scheme only, but thankfully it’s a striking one: an attractive and iridescent “mystic indigo”.

The Moto G Pro certainly looks the part; it wouldn't appear out of place in the boardroom, nor pulled out on the train for some light entertainment.

The designers haven't tried anything particularly outlandish, but the bezel-less screen (which wraps around the front-facing camera) gives the phone a modern aesthetic. The funky iridescent blue-black gradient, meanwhile, adds an expressive splash of colour.

The device feels nice enough in the hand, although it’s a touch on the heavy side and the plastic back betrays the phone’s (otherwise cleverly concealed) budget nature.

Its size also means users with smaller hands might struggle to manipulate the phone and reach all corners of the screen effectively, but that is the unavoidable price you pay for a bold 6.4-inch display - unless you opt for an expensive device with a folding screen.

When it comes to specs, the Moto G Pro is fairly well kitted out for a smartphone at this price point.

The device features a Snapdragon 665 chipset (like the Oppo A9 and Xiaomi Redmi Note 8), 4GB RAM, and 128GB storage, which proved ample for our needs, but might be sniffed at by anyone that wants to store a wealth of photos, music or documents locally - or any particularly heavy applications.

The generous 4000mAh battery might not be the world’s largest, but we found it lasted well over 48 hours under a normal level of strain, which could get you out of a sticky situation if you were to forget your charger on an overnight trip, say.

We did find, however, that the battery is a little slow to charge. Despite “fast-charge” via USB-C, it took over 3 hours to charge from near empty to 100%.

The Moto G Pro’s main 48MP camera is perhaps the phone’s most attractive quality, capable of taking some really quite crisp shots, especially at close quarters.

Other camera modes are also available, including Portrait and Night Vision, but we found the focus was temperamental with the former and the latter is probably not effective enough to worth bothering with - just wait until day time!

There’s also a 16MP front-facing camera, which will more than suffice for a quick video meeting or WhatsApp call with the family.

As for software, the Moto G Pro runs on Android One, which means users are guaranteed OS updates for two years and the device is free of bloatware.

Of course, specs mean nothing if the experience is lacking, but thankfully the Moto G Pro delivers on that front too.

The device was smooth and responsive when asked to perform pretty much any task, faltering only a couple of times when it came to switching between open apps. Business users will have no problem performing all necessary professional functions on-device - email, scheduling, task management and the like.

The 6.4-inch screen, with a pixel density of 399 ppi, is attractive and sharp enough. The generous size meant we were happy to use the device for a longer YouTube session, where otherwise we might have switched to a laptop or TV.

Set-up was also nice and simple - especially when migrating from one Android device to another (we can’t speak to the experience of iPhone users) - with a thorough tutorial holding your hand the whole way.

We did encounter some trouble transitioning between open apps. The upwards swiping motion required to open the menu is a little finicky and we often ended up swiping too far, revealing the entire grid of apps instead.

The facial recognition facility works beautifully - much better than my far more expensive (albeit older) Samsung S9 - and the fingerprint scanner is functional too. However, the phone’s palm touch protection is far too sensitive, triggering almost every time the device is picked up from a surface or pulled out of a pocket.

Then there’s the stylus, which is marketed as among the Moto G Pro’s most desirable features. In truth, it feels more like an unnecessary gimmick than a fundamental feature.

It’s not reversible, which means you are forever replacing it the wrong way round, and it is also rather small and delicate, and therefore tricky to manipulate in the hand.

When the stylus is withdrawn, the phone pulls up a menu containing a doodle pad, screenshot facility and task reminder app. None particularly demand a stylus, and even the experience with the doodle pad doesn’t feel all that much sharper when using it.

The stylus will be at its most effective keeping your children occupied for a brief period - but beyond that we never felt the need to reach for it.

Overall, the Moto G Pro offers excellent performance and functionality for a device at this highly affordable price point.

The inclination to be harsh on its less fine qualities - the stylus, the alternate camera modes and slow charge - is a testament to how well Motorola has disguised the phone’s non-premium nature.

The specs won’t blow anyone away and the phone is lacking nice-to-have extras (such as water and dust resistance), but that’s to be expected and the device performs perfectly well in pretty much any business-related scenario.

If you are looking for a smart-looking new device at a low price point and are unconcerned about the lack of frills that come with higher-end smartphones, the Moto G Pro will prove a trusty companion.

The Moto G Pro is a mid-range smartphone that feels like a much more expensive device, offering great value for money. It doesn't boast the kinds of extras you'd expect of a top-end phone, but does sport an impressive camera and striking colour scheme.