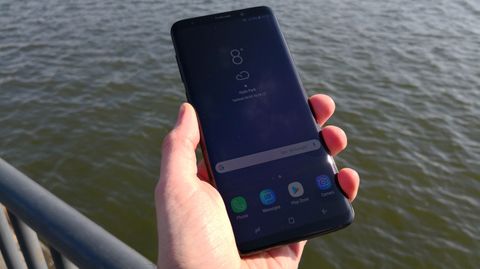 Mobile World Congress 2018 may have been lacking on heavyweight news and launches this year, but it's fair to say Samsung's latest launch was the star of the show.

The company's newest Galaxy S9 and S9 Plus devices packed in more hardware power than ever before, alongside a few nifty tricks that the company hopes will help steal users away from Apple.

As expected, the Galaxy S9 Plus is Samsung's flagship device, coming with a larger screen and boosted hardware.

We've been going hands-on with the device for the last few weeks, so how does the Galaxy S9 Plus stand up as a day-to-day business device? We put it to the test...

Despite the Galaxy S9 Plus (and it's smaller brother) being the pinnacle of Samsung's hardware design, not too much has actually changed since the previous generation.

Not that this is anything bad, of course, as Samsung's Galaxy S line has long been known for its sleek and elegant design - and the S9 Plus is no different.

What has changed is the introduction of an all-glass build, making the Galaxy S9 Plus a sleeker and smoother entity than past generations. However this polished design does make the rear of the device a major fingerprint magnet, so be prepared to polish it up a lot.

The Galaxy S9 Plus is just 8.5mm across, so it will easily slip into a jacket or trouser pocket, and Samsung already has a number of specially-designed accessories for the device to make sure you keep it safe from bump and scrapes.

And you'll want to ensure the Galaxy S9 Plus stays protected, as the gorgeous 6.2in Super AMOLED display is one of the device's high points. Remaining bright and colourful at all times, the display stretches across the entirety of the front panel, even when it is off, thanks to Samsung's "Always-On" display - which is incredibly useful if you want to quickly check notifications or the time.

On the minimalist rear panel is Samsung's new 24MP camera setup (although more of that later) alongside the fingerprint scanner, which has now moved into a more central position.

The latter is actually one of the few minor design faults with the Galaxy S9 Plus, as it is significantly smaller than the scanner on the Google Pixel 2 XL and Huawei Mate 10 Pro, meaning that trying to unlock the phone is often a bit of a scrabble.

But all things considered, the Galaxy S9 Plus is a beautiful device from all angles, and one that will certainly catch the eye no matter where you are.

A flagship smartphone necessitates a flagship hardware package, and it's fair to say that the Galaxy S9 Plus delivers on this front.

The Galaxy S9 Plus sports Samsung's most powerful line-up to date. The version we reviewed came packing a Exynos 9810 processor, 6GB RAM and 64GB internal storage.

This much-welcomed RAM upgrade in particular means that the Galaxy S9 Plus is able to handle multiple apps and tasks with ease, showing little signs of slow-down even when dealing with media streaming.

The Galaxy S9 Plus comes with an 3500mAh battery that is significantly bigger than the unit found in previous generations. Samsung says that the battery should last you through a whole day, but quite often in our tests we found this slightly lacking, and in need of a recharge sooner than the competing Android flagships.

However recharging is fast and efficient thanks to Fast Charging capabilities, meaning you will get around 40 per cent battery life from just half an hour of charge - which could be a lifesaver if you're out and about for the day.

Lastly, the camera. Much of Samsung's keynote at Mobile World Congress concerned the cool tricks and gimmicks that the S9 and S9 Plus offered, but it's fair to say none of these are really applicable for a business device.

That's not to say that you should ignore the Galaxy S9 Plus' camera, as it genuinely is one of the best set-ups around today. Sporting a two 12MP lenses, images are bright and detailed, even in low light, and the introduction of super-detailed slow-motion video will be a hugely attractive proposition for some.

Samsung has also looked to address the issues of capturing images in low-light, as the Galaxy S9 Plus sports a f/1.5 aperture – a world first for a smartphone camera, and its dual-aperture technology means your snapping woes should be long-gone.

Overall, then the Galaxy S9 Plus will be a more-than-useful all-day companion, lasting as long as your day does.

If you're comfortable with past Samsung devices, then using the Galaxy S9 Plus will be like slipping into a warm bath.

The device comes with Android 8.0 Oreo, meaning that all Google's latest tools and services are present and correct.

However this is also combined with a wealth of Samsung's own software, including an upgraded Bixby smart assistant, along with Samsung Pay and S Health. Much of this is unwanted bloatware, but can easily be filed away.

Google's Android tools mean that the Galaxy S9 Plus works well as an all-day working device, with the full suite of online services allowing for easy working on the go.

As mentioned above, Samsung's biometrics are in place to secure the Galaxy S9 Plus, with facial recognition present alongside the rear fingerprint scanner.

So from start to finish, the Galaxy S9 Plus is a more than competent workplace companion, coping with everything a working day can throw at it. However unlike its flagship competitors such as the Google Pixel 2 XL, it is clearly a consumer-focused device, meaning it may not be an entirely business-orientated offering.

The Galaxy S9 Plus is undoubtedly a seriously impressive device, featuring the biggest and best screen, and most powerful hardware, seen in the company's line-up to date.

Samsung has heavily invested in tweaking what was an excellent formula, however in truth, there isn't much to separate the S9 Plus from its elder brother, with many of the main improvements coming in the device's camera, rather than wholesale overall upgrades.

So if you're looking for a solidly work-focused smartphone, the Galaxy S9 Plus may not be for you - however for anyone looking for that extra bit of Android spark and polish, the S9 Plus could make all the difference.