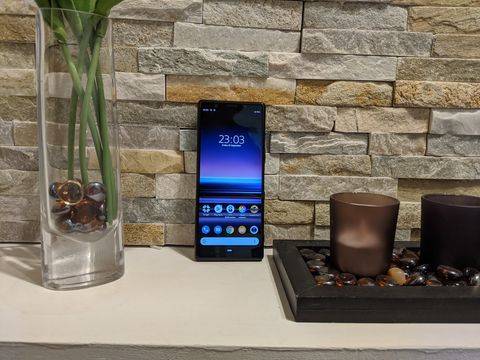 It was not so long ago that HTC, Sony and LG wrestled with Nokia and BlackBerry to convert millions of feature phone users into smartphone fans. Fast forward to the end of 2019 and it is a very, very different landscape that opens up to us.

On one hand, Google has managed to carve an interesting niche in the Android smartphone market - thanks to devices like the Google Pixel 4 XL - and on the other, the emergence of Chinese manufacturers like Xiaomi and Huawei has significantly changed the dynamics in the global smartphone market.

Sony is no longer perceived as a major player, with its smartphone business costing the Japanese company actual money. With all that in mind, we got our hands on the Sony Xperia 5, not to be confused with the older Z5.

The Xperia 5 is a smaller version of the Xperia 1 and is available either in black, blue or silver/grey; its main feature is a gorgeous 6.1-inch full HD+ OLED screen that has a 21:9 aspect ratio and is covered with a layer of Corning Gorilla Glass 6.

The entirety of the smartphone is covered with glass, which makes it feel premium but, as it is usually the case, also makes  it far more slippery especially with curved glass edges. Sadly, that’s the trend that the upper end of the market has been embracing.

The phone shies away from the current trend of using tear-drop designs for front facing cameras. Instead, there’s two reasonably thin bezels on top and at the bottom. A Type-C connector and a downward firing speaker are located on the bottom edge. A SIM + microSD tray can be found on the left while a dedicated camera button, the power button, a fingerprint reader and a volume rocker on the right.

Flip it on its back to show three 12-megapixel sensors arranged in a straight line on a raised island, just under an LED flash.

Despite its lack of flagship status - that belongs to the Xperia 1 - Sony dropped the Snapdragon 855 in the Xperia 5 which comes as a surprise; this chipset can also be found in other flagship devices elsewhere.

The 6GB RAM and 128GB UFS storage are what we’d expected from a high-end device. The battery, a 3,140mAh battery, is smaller than expected but Sony’s expertise means that it shouldn’t be much of an issue. Most reviews of the Xperia 5 - and our own subjective experience - show that the device will last long enough for users not to notice the smaller capacity.

With a weight of 16g and dimensions of 158 x 68 x 8.2mm, the Xperia 5 holds snuggly in our hand during the review, The device comes with an IP68-rating which makes protects it from water and dust projections but not from falls on hard surfaces, we’d still get a case to protect it from scratches.

Our Xperia 5 received two updates during the test, the last one being the October security patch, and runs the Xperia UI atop of Android 9 Pie. As expected, it is also laden with Sony applications like Cinema Pro, 3D Creator or Game Enhancer as well as a bit of bloatware (games, Booking.com and Amazon Prime Video).

The screen is gorgeous if a bit on the dim side when it comes to brightness. The Qualcomm Snapdragon 855 is sufficiently fast for everything thrown at it; be it a bit of browsing, youtubing or even gaming.

Having the fingerprint on the side, rather than on the front or at the back doesn’t feel natural. Speaking of fingerprints, the glass chassis used by the Xperia 5 is as one would expect, a rather unfortunate magnet for greasy fingers.

There’s no wireless charging - which is a shame - and no audio port, although that is a trend that is not likely to end. The smartphone came with a wired earphone with a 3.5-mm to USB Type-C converter, a cable and a 18W fast charger.

The Xperia 5 costs £529 SIM Free at Amazon or a quarter off its suggested retail price, that is still a good whack cheaper than the Xperia 1; the main difference between the two being a slightly bigger 4K OLED touchscreen display which - in theory - should impact the battery life negatively.

That is still far more expensive than the £500 Huawei P30 which comes with a two-year warranty, a bigger battery and four cameras totalling 100 million pixels. The Samsung Galaxy S10 is also a compelling rival with a bigger battery with a similar price tag and, one might argue, a better name recognition.

The most formidable opponent to the Xperia 5 is the Xiaomi Mi 9T Pro which sells for as little as £369 at Amazon, with the same Qualcomm Snapdragon 855 CPU, and has a pop up camera and two SIM slots.

The Xperia 5 however looks and feels like a better all rounder of the lot. The 21:9 aspect ratio allows a more elegant split screen function and is great for working with two applications; Sony’s take is less restrictive than Google’s own version.

It also makes one-handed use of the device more practical and comfortable and, as an added bonus, enables an immersive cinematic experience.

The Snapdragon 855 is just about as fast as it gets and should ensure silk smooth performance. We are not a big fan of fingerprint readers on the side, slippery glass finish or raised camera sensors. But none of these are deal breakers; a good case will solve most of them bar the first one.

A very welcomed surprise from Sony, a step down from the Xperia 1 but one which actually feels more balanced. A must have if you want a smartphone that feels compact without any compromises.