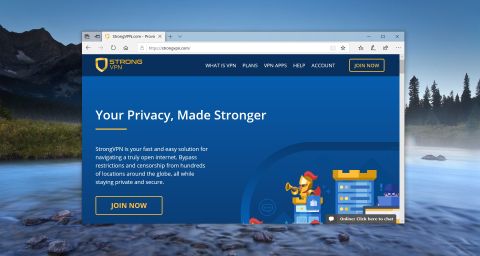 If we look beyond its less-than-favorable location, StrongVPN is an excellent provider with all the features and capabilities even VPN perfectionists will find suitable.

Coming to us from California, USA, StrongVPN is a virtual private network provider launched in 2005. It has since developed into a medium-sized company with 950+ servers scattered across more than 20 countries. While there are providers with substantially larger server networks, this is quite enough to get the job done.

This VPN vendor supports an unusually high number of simultaneous connections - 12. Most others stick to a smaller number, around 3-5, although there are a select few that don’t impose any restrictions on this number whatsoever.

Netflix, Crunchyroll, Hulu, Spotify, HBO… are the streaming services you can watch with StrongVPN, even if they are currently unavailable in your region. Unfortunately, BBC iPlayer has remained successful in blocking this provider’s attempts to bypass its restrictions.

Games that haven’t been released in all parts of the world are also accessible thanks to StrongVPN’s servers in various locations.

Torrenting might be a different story, though, as there is no mention of it anywhere on the website (the page that used to mention torrenting is now a 404 dead end) and the customer support is a bit vague about the issue.

Its apps have some practical features such as the ‘Best Available Location’ which allows users to connect to the best server based on their current location and achieve optimized performance.

StrongVPN has only two pricing plans - monthly at the price of $10.00 and yearly for $5.83 per month (billed $69.99 every year), placing it among the mid-range VPN providers price-wise. If you don’t like the service, you can cancel it at any time during the first 30 days after payment and get your money back, regardless of the reason.

Since there’s no free trial, such a refund policy is the next best thing. It gives you the freedom to test out the service to the maximum and then simply request a refund. It isn’t the most practical solution as you still have to sign up for an account and temporarily part with your money, but it’s better than nothing.

You can pay with credit cards, PayPal, and Alipay.

Besides the 256-bit encryption and the traditional protocols - OpenVPN, L2TP, SSTP, and IKEv2, the company is currently beta testing the WireGuard technology. It is a next-generation protocol aiming to outperform others in terms of speed, performance, security, resource usage, and platform support. WireGuard is currently available on the Windows, Android, Mac, and iOS clients and users can download its configuration files from the website.

A compulsory part of any VPN experience is a kill switch - the mechanism that immediately shuts down your entire Internet connection if there’s any instability or interruption of the VPN connection. This way it keeps all your information safe from prying eyes of any third parties.

StrongVPN claims to be a no-logging VPN, stating it doesn’t collect or store its users’ data and browsing activities, except the information given for account creation. However, this doesn’t mean much to a privacy-focused user who’d rather have some sort of evidence for such claims, like an audit report.

The practice of enlisting an auditing company and publishing a report on its findings is becoming common in the industry as it provides additional transparency and confidence. StrongVPN hasn’t done this yet, but it would be exceptionally useful as it is registered in the US and subject to the laws and authorities of the country notorious for disrespecting people’s privacy on its soil.

Alongside native clients for Windows, Mac, iOS, Android, and FireTV, StrongVPN supports lots of other platforms, like Linux, Kodi, Amazon Kindle, Chromium, Synology NAS, and routers. Installing the native apps is as easy as it gets - just download the app from the website or relevant app store and follow all the steps. Other platforms can be just as easily equipped with it thanks to the detailed manual setup instructions on the website.

Routers that support VPN are a great option for increasing the already high number of simultaneous connections. If you find enabling the VPN on such a device is too complicated even with the help of the manual, you can avoid the hassle by simply buying one that is already equipped with StrongVPN.

'Strong’ is the correct term to use when describing this provider’s performance. Connecting is done in seconds and without a glitch. Whichever provider you’re using, download speeds will usually be lower when the VPN is on in comparison to the regular Internet connection.

However, the difference in speeds between these two connection types is one of the things that truly define the quality of a VPN provider - the smaller the difference, the better the provider. StrongVPN excels in this sense with above-average speeds and there aren’t many competitors who can outperform it.

Downloading, installing, and using the service is a piece of cake with the help of the website’s searchable and abundant support section divided into various categories from FAQs to setup guides to billing support. For more helpful and interesting reading material, you should visit the company’s blog.

If there’s any trouble, a 24/7 live chat support is on hand to provide assistance. You can also write a detailed explanation of your problem (with screenshots and additional files) and receive an email response.

But the provider doesn’t just stop there. It also offers a phone customer support, provided you call them during their office hours - anytime between 9 AM and 5 PM CT (UTC -6), Monday through Friday.

StrongVPN doesn’t have a bunch of flashy proprietary features or multiple subscription options. But if you want a high-quality, fast, yet simple service with wide platform support, standard security features, and all the assistance you can get, then this provider is a great fit.

If we look beyond its less-than-favorable location, StrongVPN is an excellent provider with all the features and capabilities even VPN perfectionists will find suitable.