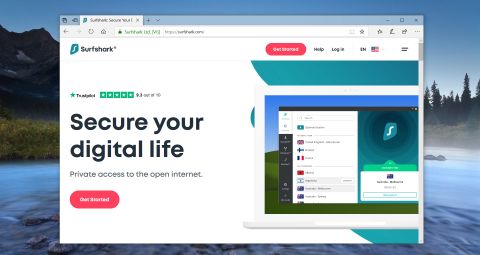 Surfshark is a growing VPN provider that offers a lot for its minuscule price. Even the most demanding users will find plenty to like, from excellent security and performance to multiple platform support and successfully bypassing geographical restrictions.

Editor's Note: What immediately follows is a rundown of the latest changes and additions since this review was last updated.

Established in the British Virgin Islands, Surfshark is a relatively new VPN provider that is making a rapid ascension with 500,000 downloads of its Android app and counting.

Users have access to over 1,000 servers in 60+ countries and most of them are optimized for P2P traffic and torrenting. Another thing that the provider excels in is efficient circumvention of geographical restrictions imposed by various services. These include Netflix, BBC iPlayer, Amazon Prime, HBO, Hulu, and others. Whereas many other providers unblock only US Netflix libraries, Surfshark will give you access to movies and shows from the UK, Canada, Japan, France, Germany, the Netherlands, South Korea, Italy, Australia, Turkey, Brazil, and Singapore. There are no limits on the number of simultaneous connections

SurfShark has a bunch of cool features like CleanWeb which blocks malware, phishing, ads, and pop-ups. A separately available HackLock mechanism scans the web databases for any leakage of your email address and password. It comes in a bundle with BlindSearch, a private, safe, ad-free, and efficient search engine. This feature is currently available on the website only and the company is working on integrating it into its apps.

If you throw in an additional $0.99 per month, you will get the HackLock and BlindSearch bundle.

A free trial is either entirely non-existent (on Windows) or isn’t there in the traditional sense (on iOS, Mac, and Android). If you want to get a taste of Surfshark’s offer on available platforms, you will still have to choose a subscription plan and payment method. The provider just won’t charge you during the first 7 days of use.

If you don’t want to continue and be charged, you will have to cancel the subscription within these 7 days. This isn’t an exception in the industry as more and more providers move away from the traditional free trial and accept this model instead.

Each plan is covered by a risk-free 30-day money-back guarantee, meaning you can use the service fully during this period and ask for a refund if you don’t like it. This is another increasingly popular model in place of a free trial and you can make use of it on any platform.

To preserve your privacy and anonymity online, Surfshark utilizes the virtually unbreachable AES-256 encryption, which is even used by the US National Security Agency (NSA) as a federal standard. The provider relies on the industry-standard OpenVPN and IKEv2 as the fastest and most secure protocols, and has also implemented a Shadowsocks protocol into its Windows app. It is an open-source encrypted proxy mainly intended for the Chinese market due to its capabilities to keep browser traffic undetectable and bypass the Great Firewall restrictions.

The optional MultiHop mechanism facilitates connecting via two different VPN servers as an additional security measure without any compromises on connection speed. Furthermore, no one will be able to tell if you’re using the VPN in the first place if you turn on the Camouflage Mode.

To prevent your information from becoming exposed if the VPN connection drops, Surfshark has included the traditional kill switch option. In the case of a described emergency, a kill switch will completely shut down the Internet connection on your device.

The company promises to never log any incoming and outgoing IP addresses, browsing, download and purchasing history, VPN servers or bandwidth you used, network traffic, connection timestamps, or session information. Being located in the British Virgin Islands provides additional reassurance since the country has no data-retention laws nor is a part of any intelligence-sharing communities.

Independent confirmation of the no-logging claims is always a welcome sight. Surfshark has brought in security experts from Cure53 who examined the provider’s browser extensions and found no major problems. That said, having its entire platform audited would be preferable.

Surfshark is compatible with a wide range of platforms. In addition to clients for Windows, Mac, iOS, Linux, and Fire TV Stick, it covers Chrome and Firefox with browser extensions. The clients and extensions are extremely easy to set up and get around as they are designed both for rookies and tech experts.

With the help of detailed user manuals, the provider can also be enabled on many additional devices, such as game consoles, smart TVs, and routers.

Connecting to servers is very fast and without any errors. Download speeds are equally impressive, placing Surfshark in the category of above-average performing VPNs.

Assistance is available on multiple fronts. You can check out the help center on the website or the provider’s blog. The searchable support site is filled with useful articles divided into multiple categories, while the blog features informative and lighthearted content about Surfshark and VPN industry in general. If you’d rather talk to someone at the company directly, live chat and web contact form are at your disposal 24/7.

Lack of a typical free trial aside, there isn’t much left to complain about this VPN vendor. Quite the opposite. It is headquartered in the haven of privacy - the British Virgin Islands, has robust security features and provides excellent speeds. It also unblocks plenty of geo-restricted content, has no limits on the number of simultaneous connections, and its 2-year plan is one of the cheapest on the market. The bottom line is Surfshark is one complete VPN platform.

Surfshark is a growing VPN provider that offers a lot for its minuscule price. Even the most demanding users will find plenty to like, from excellent security and performance to multiple platform support and successfully bypassing geographical restrictions.