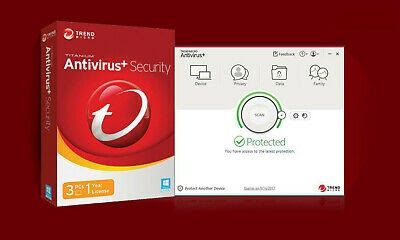 Trend Micro is one of the biggest security companies on the planet, with business interests ranging from enterprise products right the way through to antivirus software for consumers. Trend Micro Antivirus+ Security is the company’s simplest package. This program focuses mostly on the basics, but comes with plenty of additional functionality.

Trend Micro Antivirus+ Security starts at $39.95 for a one year license. The package only ever covers one device, although if you want to purchase a two year license, it’ll cost $64.95, saving you $14.95. There’s also a 30-day money back guarantee on any package you buy. There’s no free trial for the Antivirus+ Security package, but there is a 30-day free trial for the full-on Maximum Security Suite.

Coverage is only available for Windows systems and includes AI learning mechanisms, ransomware protection, safeguards against email scams, and Trend Micro’s own Pay Guard system, which helps to make online monetary transactions safer. This is all in addition to the fundamental function of the program, which is to protect your system against malware. The range of features makes the price more palatable, but it’s still on the expensive end of the spectrum for a one-device protection package.

File-based scans come in a few different flavors with Trend Micro Antivirus+ Security, including quick, full, or custom scans. In the custom scans, you’ll be able to specify certain folders or local drives to check, but that’s more or less where the user’s control ends. There aren’t many settings at all to play around with in the file scans, which may frustrate experienced users. If you like to keep things simple with your antivirus programs, however, this package will serve you just fine.

URL filtering is also provided. In comparison to the scans, there’s plenty of room for customization, which is unusual for URL filtering services. You can increase the protection to either block URLs less discriminately, or you can turn it down in to reduce the number of false alarms.

In AV-Comparatives’ real-world protection test, Trend Micro’s Antivirus+ Security program blocked 100% of threats in the February–October 2018 edition of the test. It tended to raise more false alarms than some of its competitors, but that didn’t hurt it enough to stop it claiming first place in the February–June 2018 report. It was one of only two antivirus programs that scored 100% on the protection tests.

AV-Test’s August 2018 Home Windows tests confirmed the impressive performance, with another 100% protection rating. In the SE Labs July–September 2018 Home Anti-Malware Protection report, Trend Micro placed sixth. However, it was only two percentage points off first place in a very close competition, and managed to win the top AAA award.

When it comes to extra security features, Trend Micro Antivirus+ Security fares pretty well. The company’s proprietary anti-ransomware service, Folder Shield, watches local drives as well as Documents and Pictures folders. It will alert you as soon as any trusted process attempts to modify files. This is a customizable feature, and you can tweak it to watch more folders if you’d like.

Pay Guard is another Trend Micro feature, targeted at making online banking and other transactions more secure. It does this by launching your default browser with its most intense security settings. It’s hard to tell how much difference this will actually make, since Trend Micro doesn’t have much control over how the browser works, but it’s an interesting feature all the same.

There’s a pretty average spam filter included, and although it won’t change your life, it is at least customizable. However, the link filtering tool is impressive. By blocking any emails that contain links to known harmful websites, you’ll be making yourself that much safer online. Again, it contains plenty of settings that you can adjust in order to suit the level of strength you require.

Trend Micro’s Security suites—Maximum Security and Internet Security—placed 12th and 13th out of a field of 14 in PassMark’s 2019 Security Products Performance report. A Trend Micro product came 13th out of 18  in AV-Comparative’s October 2018 performance test. Even though these were full suites being tested and not just Trend Micro Antivirus+ Security, it’s reasonable to assume that the system impact might be less than ideal.

It’s not the end of the world, though. It might slow your system down a little, but the difference is unlikely to be catastrophic, and you’ll be able to change the way the program works to suit your own system’s needs.

The interface is user-friendly and intuitive, with large icons, clear descriptions of security status, and a huge scan button. Even the settings are straightforward—rather than bury the meaning of the options in jargon, Trend Micro has focused on using straightforward English, which is nice to see. As a final touch, there are tooltips all over the place, helping to explain anything that’s still confusing.

The installer works excellently, meaning from the user’s end, there’s very little you need to do. Once it’s installed, it’ll stay in the background, apart from an additional icon in the system tray. That’s good to see from an antivirus—you don’t need it front and center, and it’s easy to find when you do need it.

In terms of support, Trend Micro provides FAQs, how-to videos, and a wide range of customer service options. You can reach them on social media, via email, via life chat, via telephone, or even by asking the community on the forums. The support staff are knowledgeable and friendly, and have generally received good reviews from users.

Trend Micro Antivirus+ Security is an impressive antivirus program—strong on the basics, with a few additional features thrown in to boot. The cost is the biggest downside, although the company does run promotions regularly, so if you keep an eye on their website, you should be able to find it at a more reasonable price without too much trouble.