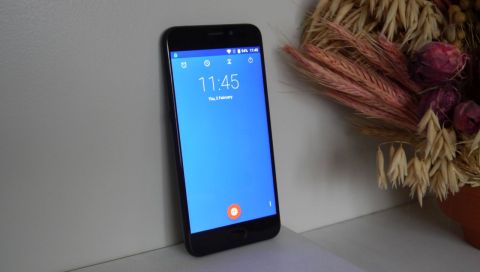 Premium experience with an affordable price tag. This is a close as you will get to a super phone without breaking the bank

Smartphones have replaced tablets and traditional computers for millions of users as the preferred – and often only – way to access the internet.

While the initial waves of devices were nothing more than souped-up feature phones, the past couple of years have seen the arrival of models that are not only far more sophisticated but also significantly more powerful than their predecessors.

Take the UMi Plus E for example which packs the sort of firepower that you would expect from a mid-range to high end laptop but with a price tag that’s more than reasonable.

But there’s more to it than just the hardware as we’ll reveal later and there’s plenty of hints as to where the next generation of smartphones will be heading.

Gearbest – which provided us with the review sample – sells the UMi Plus E for just over £220.

These costs are exclusive of any taxes that may be levied by HMRC or the courier companies on behalf of the vendor.

The attention to details starts with the box itself. For the first time in a while, we’ve been impressed by the packaging of a smartphone. UMi clearly understands that making a good impression even before you handle the device is important. As such there’s no cardboard box but instead, a customised polycarbonate box that adds to the exclusive feel of the UMi Plus E.

This is clearly a smartphone that aspires to compete in the high-end market as designers have liberally inspired themselves from the Google Pixel smartphone, a device that costs nearly three times more. Put side by side, the similarities are flagrant but it is unlikely that Google will go after Chinese smartphone vendors for imitating its flagship device.

After all, it is for the common good of Android as an ecosystem. The UMi Plus E has an aluminium alloy unibody design (“6000 series with anodic oxidation process” says the marketing brochure) and a Sharp-sourced 2.5D arc 5.5-inch LTPS full HD screen display with 3D polishing, a higher screen-to-body ratio (thanks to a narrow bezel) and T2X-1 glass protection.

The end result is a device that can be comfortably held in one hand with a premium feel and, unlike the Honor 8, one which won’t slip due to a glass back. Two speakers are located at the bottom of the device with a USB type-C port bang in the middle.

There’s a single physical button on the bottom front which doubles as a fingerprint reader. On either side of the UMi Plus E are a dedicated camera button, the power button and a volume one. A quick note about the buttons; for some reason, the last two appear to be a tad loose, that is, they tend to produce a slight metallic noise when operated.

Could well be a rogue pre-production snafu but you’ve been warned. A dual-flash 13-megapixel camera with a Samsung sensor (S5K3L8) that is capable of recording 4K video can be found at the back. UMi claims that the phone’ phase detection auto focus (PDAF) technology can fast focus in about 100ms. A front-facing 5-megapixel shooter completes the feature list.

Uniquely amongst smartphones that aspire to conquer the top-end of the market, the UMi Plus E sports a Mediatek SoC, the Helio 820, which is an 8-core Cortex-A53 powered powerhouse clocked at 2.3GHz with an ARM Mali-T880 MP2GPU running alongside it at 0.9GHz.

That system-on-chip is fabbed by TSMC using a 16nm FinFET fabrication node which, while not as advanced as the competition, ensures adequate power consumption/dissipation.

The phone also offers 4G+/Cat 6 LTE (up to 300Mbps) as well as VoLTE; shame that you can only get two nano SIM cards to run if you sacrifice the microSD card.

Note that the device comes with 64GB onboard storage already so that should alleviate most users’ need for space. The UMi Plus E is also one of a handful of devices that offer 6GB of RAM (LPDDR4) and 64GB (eMMC 5.1), both manufactured by Samsung.

Could such profligacy in terms of resources potentially paves the way to Windows on smartphones soon? That could well be an option. Despite being relatively portable for a 5.5-inch model (15.60 x 7.60 x 0.91 cm and a weight of 185g), engineers have still managed to squeeze a Sony-sourced battery with a staggering 4,000mAh capacity, far more than on the Pixel.

The UMi Plus E can be fully charged in less than two hours using its proprietary charger; that latter delivers between 1.25A and 2.5A using Mediatek’s own PE+ Quick Charge technology. Shame that there is no NFC feature but it does have status LED.

As expected, the phone runs on Android 6.0 Marshmallow and UMi has dropped in its own custom user interface instead of going stock.

This is a damn powerful smartphone and while we didn’t game on it or run anything taxing on it, the sheer amount of resources available should make an easy task out of anything thrown at it.

The combination of the X20 with 6GB of RAM and eMMC 5.1 storage is lethal. There should be enough firepower in that phone to compete even with a mid-range Windows-based laptop.

One would have to be seriously biased against the UMi Plus E in order not to appreciate the sheer competitiveness of the smartphone. It is keenly priced, has an exquisite design and doesn’t look cheap compared to more premium smartphones like the Google Pixel.

Upgradability is an unknown quantity at this stage as UMi is a relative newcomer for us. Combined with the fact that this smartphone lacks NFC capabilities, both arguments prevent it from becoming our all-time favourite.

Also bear in mind that you are unlikely to find a wide variety of accessories to equip it. What does the phone tell us about the future of Chinese smartphones? Expect the price of the flagship smartphones to gradually creep up as they catch up on traditional leaders (Sony, HTC, LG and Samsung).

Premium experience with an affordable price tag. This is a close as you will get to a super phone without breaking the bank