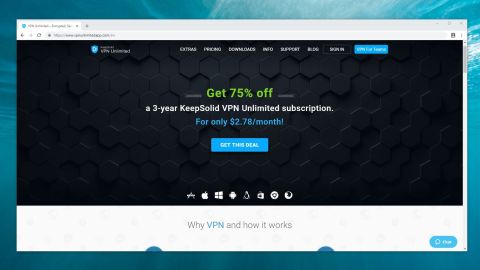 VPN Unlimited has tempting prices and some appealing features, but this is overshadowed by logging and other issues. There is still a lot to like especially if you live in a country where VPNs are often blocked.

KeepSolid is the New York-based company behind a wide range of products including VPN Unlimited.

This VPN seems a little smaller than the competition with the company claiming to have only 400+ servers. For comparison, ExpressVPN has over 2,000 servers and NordVPN has 4,900+ servers. However, VPN Unlimited’s servers are widely spread with more than 70 locations available worldwide.

The company supports all of the standard protocols including OpenVPN, L2TP/IPSec, IKEv2 and PPTP. There’s also a bonus in the company’s own KeepSolid Wise which redirects traffic through the TCP 443 and UDP 33434 ports to make it more difficult to detect and block.

KeepSolid sets itself apart from other VPNs by suggesting its service is ideal for users in China, Iran, Saudi Arabia and anywhere else where there are restrictions on using a VPN and governments try to actively block their use.

The company has an impressive list of apps with support for most major platforms including Windows, Mac, Android, iOS, Linux and Apple TV. There are also browser extensions for Chrome, Firefox and even Opera.

VPN Unlimited supports up to five devices on one account though the company does things a bit differently than other VPN providers. While other providers typically support three or five simultaneous connects from any combination of devices, VPN Unlimited has five ‘slots’ which are allocated to particular devices or browser extensions as you connect them.

Once these slots are filled up, you’ll have to go onto the company’s site and delete one of these devices before being able to add a new one.

For those who want a VPN for life, you’re in luck as the company even offers a lifetime of VPN usage for a one time payment of $199.99 (£154). If you’re happy with VPN Unlimited’s service this might be a good option. However, if you stop using your VPN or the company closes its doors, then a lifetime subscription will end up being more expensive than its other plans.

VPN Unlimited’s customers can even get their own personal VPN server. However, this option is much more expensive at $24.99 (£19.23) a month but if you want the best performance without other users hogging up the company’s servers then it could be a good choice.

VPN Unlimited protects its users privacy by using only the strongest VPN protocols. By default that means OpenVPN which is the standard protocol on both the company’s mobile and desktop apps. This uses AES-256 encryption for industry-standard levels of security but you can always use a different protocol if you choose.

KeepSolid also allows you to use its own Wise technology in its apps. This takes the core OpenVPN protocol, scrambles it a little and routes it a little differently than a regular connection. While this may affect the VPN’s speeds, it should allow you to bypass VPN detection and blocking systems used in countries like China.

The Android and Mac apps also have a kill switch built in to block your Internet traffic if the VPN suddenly drops. Unfortunately, this feature has not made it to the Windows version of VPN Unlimited yet.

VPN providers often try to make their policy on logging immediately clear on their websites with phrases like ‘Zero Logging’ prominently displayed.

The VPN Unlimited website though does not make an effort to highlight its logging procedures and any mention of them is also completely absent from its front page.

"KeepSolid Inc. may ask you to provide us with some technical non-personal information which may be collected in the background by the client apps. The following information may be collected: the user’s KeepSolid ID; the connection attempt time; the connection type; the encryption type; the device type, etc. This information will be used strictly for technical purposes, such as overall system improvement and increase of user experience."

This means that KeepSolid does have some session logging with records of the date and time of connections, the protocol and device type as well as any other details the company might find useful.

This could be more information than some users want recorded but for most users VPN Unlimited’s logging should not impede on their activities online.

During our tests on VPN Unlimited’s performance, the connections were generally very reliable and we were able to connect to all but one of the 68 servers we tried.

Download speeds were not the best we’d seen but they were acceptable for everyday use. When connecting to VPN Unlimited’s closest servers to our location in the UK we managed to get speeds of 65Mbps. Other European countries saw speeds around 60Mbps and we saw similar performance when connecting to servers in the US.

Overall, KeepSolid offers decent speeds but some locations had inconsistent results and very poor performance so we recommend testing this VPN with the servers you want to use before you commit to a plan.

While many VPN providers claim to put your privacy first, they will often ask for your email address, payment details and more before you sign up.

KeepSolid surprised us by not requiring that we sign up on its website and we were able to create a new account directly from within the Windows client. You will have to enter an email address and password to make full use of the service but even if you don’t confirm the email you can still use VPN Unlimited’s client for free for 24 hours.

The company’s apps performed well and the Android app even allowed us to sign in via fingerprint recognition as opposed to a password.

VPN Unlimited also offers browser extensions for Chrome, Firefox and even Opera so that you connect to the service right from your browser without the need to open a separate app.

VPN Unlimited’s first line of support is its web knowledgebase where you’ll find a number of installation guides and FAQ pages.

These articles were often short on details and you’re better off contacting the company directly with any questions you may have. You can do this by tapping the Support icon at the bottom right of the website and what looks like a chat window will pop up. Unfortunately this is just a contact form and not a live chat option.

Email support may not be as convenient as live chat but Keep Solid answered are questions quickly and we received a response just four minutes after posting a question.

VPN Unlimited offers decent performance for a fair price and has apps for all major platforms. The session logging and lack of a kill switch in the Windows client could be an issue for some but if your needs are simple or you live in a country notorious for blocking access to VPNs the service just might be for you.

VPN Unlimited has tempting prices and some appealing features, but this is overshadowed by logging and other issues. There is still a lot to like especially if you live in a country where VPNs are often blocked.